Beating the limits of the light microscope, one photon at a time 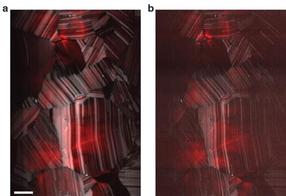 Photoluminescence (red) and second harmonic generation (grayscale) from pure cadmium-telluride solar cells, imaged simultaneously. Standard resolution is on the left, and enhanced resolution, on the right, was captured by a CSU custom-built microscope.

The world's most advanced light microscopes allow us to see single molecules, proteins, viruses and other very small biological structures. But even the best microscopes have their limits.

Their work was published with senior authorship by Randy Bartels, professor in the Department of Electrical and Computer Engineering, who holds joint appointments in Biomedical Engineering and Chemistry. The first author is Jeffrey Field, a research scientist in Bartels' group and director of CSU's Microscope Imaging Network (MIN). The MIN is a Foundational Core Facility of university-wide instrumentation overseen by the Office of the Vice President for Research.

The work was a multidisciplinary effort, including authorship by graduate student Keith Wernsing and postdoctoral researcher Scott Domingue; and associate professor Jennifer DeLuca and research scientist Keith DeLuca in biochemistry. The collaboration was seeded by a Catalyst for Innovative Partnerships project, supported by the Office of the Vice President for Research, aimed at new techniques for studying the human genome.

The resolving power of a traditional microscope is limited by how tightly light can be focused, which is known as the diffraction limit. Super-resolution microscopy, a technique that garnered the 2014 Nobel Prize in Chemistry, gets around these limitations, but in the vast majority of cases requires precise control of individual fluorescent molecules to circumvent the diffraction limit of light. Fluorescence is very important for biological imaging, for example, in a well-established deep-tissue imaging technique called multiphoton microscopy. There are other types of image contrasts that provide valuable information about a specimen, but they cannot be used with standard super-resolution methods.

The CSU instrument is based on a technique called spatial frequency modulated imaging (SPIFI), which has been under development in the Bartels lab for roughly five years. By using their multiphoton SPIFI (MP-SPIFI) microscope to simultaneously collect images through both fluorescence and second-harmonic generation, they've achieved spatial resolution beyond that of a conventional multiphoton microscope.

In conventional multiphoton microscopy, extremely short laser pulses are focused to a tight spot on a specimen, exciting fluorophores to produce an image. With CSU's MP-SPIFI microscope, a much larger region is simultaneously illuminated with multiple femtosecond laser pulses. That creates what's called an interference pattern, which allows the researchers to build up an image.

For PNAS, they demonstrated their microscope on common biological samples called HeLa cells, and also on solar cells made out of cadmium telluride. This ability to super-resolve with second-harmonic generation, as well as other contrast mechanisms, may provide valuable insights in varied disciplines, giving researchers the capability to image unlabeled structures with unprecedented resolution.

Another significant benefit of the MP-SPIFI microscope is the potential to provide super-resolved images in highly scattering biological tissues. Most super-resolution techniques require affixing cells to glass slides and thus cannot be applied to living tissue. The new CSU technique could allow super-resolution microscopy to happen in vivo, or within larger specimens of biological tissues. Bartels and Field are quick to point out that if one could enhance the resolution of images collected from in vivo specimens, and with multiple contrast mechanisms simultaneously, a wealth of biological information can be obtained.

"If we can do this below the surface of a biological sample such as live tissue, that is the utility of this," Bartels said. "We can beat the diffraction limit of a canonical two-photon microscope."