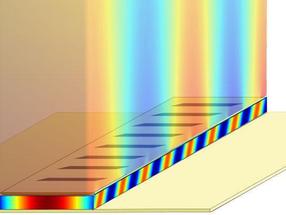 In this illustration of a terahertz plasmonic laser, the laser cavity is enclosed between two metal films (with periodic slits on the top film). The colors represent coherent SPP light waves. One wave is confined inside the 10-micron-thick cavity. The other, with a large spatial extent, is located on top of the cavity.

Once the preferred weapon of B-movie madmen and space-fiction heroes alike, the laser -- a device that generates an intense beam of coherent electromagnetic radiation by stimulating the emission of photons from excited atoms or molecules -- has grown a bit domesticated of late.

These days, it has a steady job in industry, and spends its spare time printing documents in home offices and playing back movies in home theaters. Here and there it pops up in medical journals and military news, but it's basically been reduced to reading barcodes at the grocery checkout -- a technology that's lost its mojo.

But lasers are still cool, insists Sushil Kumar of Lehigh University, with vast potential for innovation we've just begun to tap. And with support from the National Science Foundation (NSF), he's on a mission to prove it.

Kumar, an associate professor of electrical and computer engineering , focuses specifically on lasers that arise from a relatively unexploited region in the electromagnetic spectrum, the terahertz (THz), or far infrared, frequency. A researcher at the forefront of THz semiconductor 'quantum-cascade' laser technology, he and his colleagues have posted world-record results for high-temperature operation and other important performance characteristics of such lasers.

His goal is to develop devices that open up a wide array of possible applications: chemical and biological sensing, spectroscopy, detection of explosives and other contraband materials, disease diagnosis, quality control in pharmaceuticals, and even remote-sensing in astronomy to understand star and galaxy formation, just to name a few.

Yet despite the known benefits, Kumar says that terahertz lasers have been underutilized and underexplored; high cost and functional limitations have stymied the innovation that would lead to such usage. Kumar, however, believes he's on track to truly unleash the power of THz laser technology; he recently received a grant from the NSF, Phase-locked arrays of high-power terahertz lasers with ultra-narrow beams , with a goal of creating THz lasers that produce vastly greater optical intensities than currently possible -- and potentially removing barriers to widescale research and commercial adoption.

Focusing on a solution

According to Kumar, the terahertz region of the electromagnetic spectrum is significantly underdeveloped due to lack of high-power sources of radiation. Existing sources feature low output power and other undesired spectral characteristics which makes them unsuitable for serious application. His current project aims to develop terahertz semiconductor lasers with precise emission frequency of up to 100 milliwatts of average optical power -- an improvement of two orders of magnitude over current technology -- in a narrow beam with signifcantly less than five degrees of angular divergence.

Kumar works with quantum cascade lasers (QCLs). These devices were originally invented for emission of mid-infrared radiation. They have only recently begun to make a mark at THz frequencies, and in that range they suffer from several additional challenges. In this cutting-edge environment, Kumar's group is among a select few in the world making progress toward viable and low-cost production of these lasers.

Kumar's intended approach will significantly improve power output and beam quality from QCLs. A portable, electrically-operated cryocooler will provide the required temperature-cooling for the semiconductor laser chips; these will contain phase-locked QCL arrays emitting at a range of discrete terahertz frequencies determined by the desired application.

In previous work, Kumar and his group showed that THz lasers (emtting at a wavelength of approximately 100 microns) could emit a focused beam of light by utilizing a technique called distributed feedback. The light energy in their laser is confined inside a cavity sandwiched between two metallic plates separated by a distance of 10 microns. Using a box-shaped cavity measuring 10 microns by 100 microns by 1,400 microns (1.4 millimeters), the group produced a terahertz laser with a beam divergence angle of just 4 degrees by 4 degrees, the narrowest divergence yet achieved for such terahertz lasers.

Kumar believes most companies that currently employ mid-infrared lasers would be interested in powerful, affordable terahertz QCLs, and that the technology itself will spawn new solutions.

"The iPhone needed to exist before developers could write the 'killer apps' that made it a household product," he says. "In the same way, we are working toward a technology that could allow future researchers to change the world in ways that have yet to even be considered."