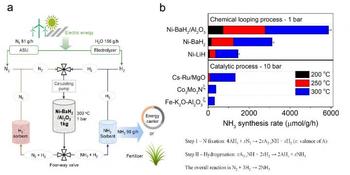 This image shows production of ammonia via a chemical looping process.

A Chinese research team has developed a "milder" way to synthesize ammonia by requiring lower temperature and pressure than the current method. The process offers great promise for saving energy and reducing carbon dioxide emissions.

The new process was developed by a research team led by Prof. CHEN Ping and Dr. GUO Jianping from the Dalian Institute of Chemical Physics (DICP) of the Chinese Academy of Sciences. It involves a new chemical looping method based on metal hydride and imide. The process operates at atmospheric pressure and 100-350°C, in contrast with the Haber-Bosch process - currently dominating world ammonia production - which operates at 100-200 bars and 350-450°C.

Ammonia helps feed humanity through its role in producing nitrogen fertilizer. It also has the potential to store and transport renewable energy. However, current ammonia production is very energy intensive - consuming1-2% of world energy output. In addition, about 1.9 metric tons of carbon dioxide is produced for every metric ton of ammonia.

"In order to address the challenges of the energy and environmental crisis, we developed an alternative process for ammonia synthesis from nitrogen gas, water and renewable energy," said CHEN, the study's lead researcher.

"In the first step, nitrogen was fixed through the reduction of nitrogen gas by alkali or alkaline earth metal hydrides to form imides," said CHEN. "In the second step, the imides were hydrogenated to produce ammonia and regenerated the metal hydrides."

CHEN explained that the two steps could be accelerated by the catalysis of transition metals. "The chemical loop mediated by BaNH and catalyzed by Ni could produce ammonia in the temperature range of 100 to 350°C and atmospheric pressure. The production rate of ammonia was more than one order of magnitude higher than that of the thermocatalytic process," CHEN added.

CHEN noted that the study provides a "promising solution to the efficient harvest and storage of renewable energy." CHEN said the process has the advantage of operating at atmospheric pressure and also offers a means of synthesizing ammonia in a localized, distributed manner.