A new type of photocatalysts -- nanostructures from titanium dioxide 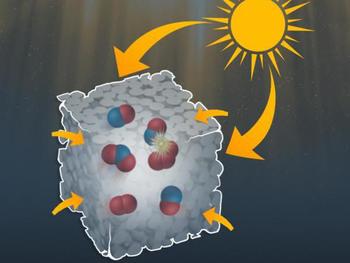 A RUDN chemist developed a new type of photocatalysts - nanostructures from titanium dioxide. Hollow nanocubes with ultra-thin walls act like nanoreactors and provide for 28 fold more effective organic reactions at room temperature under the influence of visible light.

Traditional methods of manufacturing pharmaceuticals, fertilizers, pesticides, food additives, and other useful products from organic substances require high pressure and temperature levels. One of the ways to make the chemical industry less energy-consuming is photocatalysis. Photocatalysts are able to speed up organic reactions under the influence of light under ambient conditions, that is without increasing temperature or pressure.

Titanium dioxide is considered a prospective catalyst. However, its catalytic activity is activated only in UV light which comprises only 5% of sunlight. When shaped as hollow nanostructures, titanium dioxide becomes more active as a catalyst. Rafael Luque, the Director of the Center for Molecular Design and Synthesis of Innovative Compounds for Medicine together with colleagues from Iran described a new type of such structures with high photocatalytic activity: black hollow nanocubes made of titanium dioxide (BHC-TiO2).

The development of the new nanostructures took almost 2 years. The sciences created a comparatively easy approach to the design of nanostructures. The procedure consists of 4 main steps. First, the chemists prepare nanocubes made of hematite and cover them with titanium dioxide. On the next step the insides of the cubes are washed out using the solution of hydrochloric acid leaving only the thin titanium dioxide shell. The final stage is baking at 550° C in a hydrogen-argon atmosphere. After that the samples turn into black hollow nanocubes. The whole process takes around 2-3 days.

"The main advantages of our structures are that they are easy to create, durable, and can be used for different purposes. BHC-TiO2 can be used as a photocatalyst, for water purification to accelerate the decomposition of pollutants as well as for biomass conversion Currently we are studying the application of photocatalysts in the production of organic substances," said Rafael Luque, the Director of the Center for Molecular Design and Synthesis of Innovative Compounds for Medicine.

The researchers from RUDN checked the catalytic activity of several types of nanocubes - one-piece ones made of titanium dioxide, hollow ones, and baked black hollow BHC-TiO2 ones - in an experiment involving benzimidazole synthesis. The derivatives of this substance are in high demand in the pharmaceutical industry. Some samples were exposed to visible light from a regular halogenic lamp, and some - to UV radiation.

BHC-TiO2 particles showed high catalytic activity under both types of exposure. 86% of the initial substance was processed under the influence of visible light, which is 28 times more than in the experiment with one-piece (non hollow) titanium dioxide cubes. Chemists believe that this activity of the new structures is due to their hollowness, large surface area, and porous ultra-thin walls. All these properties make nanocubes work as nanoreactors, i.e. reflect and scatter light and easily absorb organic substances, creating a medium for effective reactions inside the cubes. Ti3+ ions formed on the surface of nanocubes in the course of baking also play an important role. RUDN scientists believe they facilitate electron transfer making the whole structure absorb visible light (and not just the UV light like pure titanium dioxide).

The experiments proved a high durability of the nanoreactors: even after the sixth use, the structures kept their form and almost all Ti3+ ions on their surface. Therefore, BHC-TiO2 can be used to carry out at least 7 organic reactions without any loss in their catalytic activity.