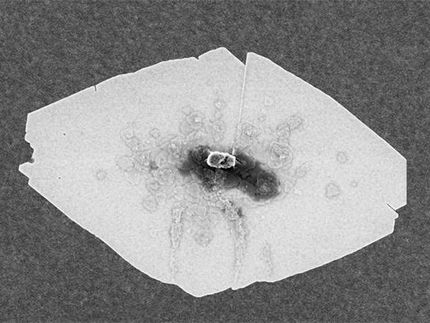 A team of researchers, led by the University of Minnesota, has developed a groundbreaking one-step, crystal growth process for making ultra-thin layers of material with molecular-sized pores. Researchers demonstrated the use of the material, called zeolite nanosheets, by making ultra-selective membranes for chemical separations.

These new membranes can separate individual molecules based on shape and size, which could improve the energy-efficiency of chemical separation methods used to make everything from fuels to chemicals and pharmaceuticals.

The researchers have filed a provisional patent on the technology.

"Overall, we've developed a process for zeolite nanosheet crystal growth that is faster, simpler, and yields better quality nanosheets than ever before," said Michael Tsapatsis, a University of Minnesota chemical engineering and materials science professor and lead researcher on the study. "Our discovery is another step toward improved energy efficiency in the chemical and petrochemical industries."

Watch a video of the one-step process for growing zeolite nanosheets, ultra-thin materials made of crystal structures that could revolutionize chemical separations.

Today, most chemical and petrochemical purification processes are based on heat-driven processes like distillation. These processes are very energy-intensive. For example, chemical separations based on distillation represent nearly 5 percent of the total energy consumption in the United States. Several companies and researchers are developing more energy-efficient separations based on membranes that can separate molecules based on size and shape. One class of these membranes is based on zeolites, silicate crystals that have pores of molecular dimensions. However, the multi-step processes for manufacturing these membranes are costly and difficult to scale up, and commercial production remains a challenge.

In this new discovery, researchers have developed the first-ever, bottom-up process for direct growth of zeolite nanosheets. These nanosheets can be used to make high quality molecular sieve membranes. The new material, is only about five nanometers in thickness, and several micrometers wide (10 times wider than previous zeolite nanosheets). The new nanosheets also grow in a uniform shape making it much easier to make the membranes used in chemical purification.

"With our new material is like tiling a floor with large, uniform tiles compared to small, irregular chips of tile we used to have," said Mi Young Jeon, a University of Minnesota chemical engineering and materials science Ph.D. graduate and the first author of the study. "Uniform-shaped zeolite nanosheets make a much higher-quality membrane with surprisingly high separation values that can sieve-out impurities." The researchers' molecular dynamics calculations also support that separation values in excess of 10000 may be achieved with these nanosheets.

To grow the zeolite nanosheets, researchers begin with seed nanocrystals that, first, double in size and develop facets. The seed crystals then trigger the formation of a twin outgrowth that evolves to become the nanosheet. Nanosheets start to appear from one corner of the seed crystals and then continue to grow, completely encircling the seed to form a faceted nanosheet that is extremely thin and uniform in size and shape.

The uniform shape of the crystals came as quite a surprise, when it was first observed four years ago. "In my 25 years of studying zeolite crystal growth, I'd never seen anything like this before," Tsapatsis said.

Other researchers were also surprised with early results. "It was exciting and rewarding to look at these thin crystals under the electron microscope and study their structure," said Andre Mkhoyan, a University of Minnesota chemical engineering and materials science professor.

"After identifying the presence of a twin in the electron microscope, we knew we had found something that would be a big step forward in developing ultrathin porous crystals," added Prashant Kumar, a University of Minnesota chemical engineering and materials science senior graduate student who performed electron microscopy experiments.

"The nanosheet's ability to grow in only two dimensions was initially unexpected but we were able to systematically unravel its structure and crystal growth mechanism" said Peng Bai, a University of Minnesota postdoctoral researcher in both the Department of Chemistry and Department of Chemical Engineering and Materials Science who used quantum chemical methods to interpret the unique structure.