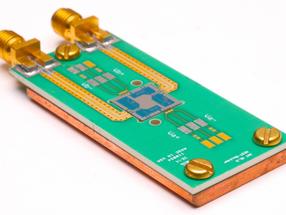 This quantum voltage noise source (QVNS) provides a fundamentally accurate voltage signal that can be compared to the voltage noise from electrons in a resistor. Measuring the voltage noise enabled researchers to determine the Boltzmann constant, which relates an energy of a system to its temperature.

By measuring the random jiggling motion of electrons in a resistor, researchers at the National Institute of Standards and Technology (NIST) have contributed to accurate new measurements of the Boltzmann constant, a fundamental scientific value that relates the energy of a system to its temperature. NIST made one measurement in its Boulder, Colorado, laboratory and collaborated on another in China.

These results will contribute to a worldwide effort to redefine the kelvin, the international unit of temperature, and could lead to better thermometers for industry.

Accurate temperature measurement is critical to any manufacturing process that requires specific temperatures, such as steel production. It's also important for nuclear power reactors, which require precise thermometers that are not destroyed by radiation and do not need to be regularly replaced by human workers.

"We live with temperature every day," said Samuel Benz, group leader of the NIST research team involved with the new results. "The current measurements that define the kelvin are 100 times less accurate than measurements defining the units for mass and electricity." The kilogram is known to parts per billion, while the kelvin is only known to a part in a million.

In late 2018, representatives from nations around the world are expected to vote on whether to redefine the international system of units, known as the SI, at the General Conference on Weights and Measures in France. When implemented in 2019, the new SI would no longer rely upon physical objects or substances to define measurement units. Instead, the new SI would be based on constants of nature such as the Boltzmann constant, which depends fundamentally on quantum mechanics, the theory that describes matter and energy at the atomic scale.

To define the kelvin, scientists currently measure the triple point of water in a sealed glass cell. The triple point is the temperature at which water, ice and water vapor exist in equilibrium. This corresponds to 273.16 kelvins (0.01 degrees Celsius or 32.0 degrees Fahrenheit). The kelvin is defined as 1/273.16 of the measured temperature value.

This method has drawbacks. For example, chemical impurities in the water can slowly lower the cell's temperature over time. Researchers must also make corrections due to the presence of different isotopes of water (i.e., having the same number of protons but different numbers of neutrons). And measurements at temperatures higher or lower than the triple point of water are inherently less precise.

"By defining the kelvin in terms of the Boltzmann constant, you don't have to have these variations in uncertainty, and you can use quantum-mechanical effects," said Nathan Flowers-Jacobs, lead author of the paper on the new NIST measurement, accepted for publication in the journal Metrologia.

For the Boltzmann constant to be good enough to redefine the kelvin, there are two requirements established by the international group in charge of the issue, known as the Consultative Committee on Thermometry of the International Committee for Weights and Measures. There must be one experimental value with a relative uncertainty below 1 part per million--and at least one measurement from a second technique with a relative uncertainty below 3 parts per million.

So researchers have been pursuing a variety of methods for measuring the Boltzmann constant. The most accurate method remains measurements of the acoustical properties of a gas. A 1988 NIST result yielded a value known to better than 2 parts per million, and more recent measurements have achieved less than 1 part per million. Scientists around the world have devised a variety of other techniques, including ones that measure other properties of gases.

A completely different approach is a technique that does not rely on ordinary gases but instead mainly on electrical measurements. The technique measures the degree of random motion--"noise"--of electrons in a resistor. This "Johnson noise" is directly proportional to the temperature of electrons in the resistor--and the Boltzmann constant. Past measurements of Johnson noise were plagued by the problem of measuring tiny voltages with parts-per-million accuracy; this problem is exacerbated by the Johnson noise of the measurement equipment itself.

To address this issue, the NIST researchers in 1999 developed a "quantum voltage noise source" (QVNS) as a voltage reference for Johnson Noise Thermometry (JNT). The QVNS uses a superconducting device known as a Josephson junction to provide a voltage signal that is fundamentally accurate, as its properties are based on the principles of quantum mechanics. The researchers compare the QVNS signal to the voltage noise created by the random motions of electrons in the resistor. In this way, the researchers can accurately measure Johnson noise--and the Boltzmann constant.

In 2011, the group began publishing Boltzmann constant measurements with this technique and has made improvements since then. Compared to the 2011 measurements, the new NIST results are 2.5 times more accurate, with a relative uncertainty of approximately 5 parts per million.

According to Flowers-Jacobs, the improvement came from better shielding of the experimental area from stray electrical noise and upgrades to the electronics. The researchers performed careful "cross-correlation" analysis in which they made two sets of measurements each of the Johnson noise and the quantum voltage noise source to reject other noise sources from the measurement. Other factors included increasing the size of the resistor for a larger source of Johnson noise and better shielding between the different measurement channels for the two sets of measurements.

NIST also contributed expertise as well as a quantum voltage noise source to a new Boltzmann measurement at the National Institute of Metrology in China. Thanks in part to excellent isolation from noise sources, this measurement has a relative uncertainty of 2.8 parts per million, satisfying the second requirement for a redefined kelvin.

"It's been a very collaborative, international effort," Benz said. Germany has also begun an effort to develop Johnson noise thermometry for disseminating a primary standard for thermometry.

"All the data will be included" in determining a new Boltzmann constant value, said Horst Rogalla, leader of the NIST Johnson Noise Thermometry Project. "The important point is the condition for redefining the kelvin has been fulfilled."

Beyond the new SI, devices based on Johnson thermometry have potential for being used directly in industry, including in nuclear reactors. "At the moment, we are using it to define the kelvin, but afterwards, we will use it as an excellent thermometer," Rogalla said.