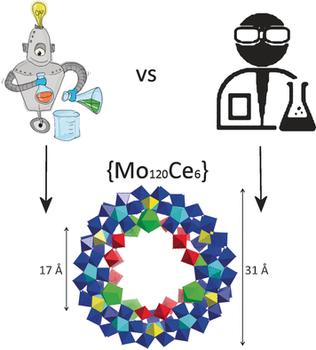 Who is the better experimentalist, a human or a robot? When it comes to exploring synthetic and crystallization conditions for inorganic gigantic molecules, actively learning machines are clearly ahead, as demonstrated by British Scientists in an experiment with polyoxometalates.

Polyoxometalates form through self-assembly of a large number of metal atoms bridged by oxygen atoms. Potential uses include catalysis, electronics, and medicine. Insights into the self-organization processes could also be of use in developing functional chemical systems like "molecular machines".

Polyoxometalates offer a nearly unlimited variety of structures. However, it is not easy to find new ones, because the aggregation of complex inorganic molecules to gigantic molecules is a process that is difficult to predict. It is necessary to find conditions under which the building blocks aggregate and then also crystallize, so that they can be characterized.

A team led by Leroy Cronin at the University of Glasgow (UK) has now developed a new approach to define the range of suitable conditions for the synthesis and crystallization of polyoxometalates. It is based on recent advances in machine learning, known as active learning. They allowed their trained machine to compete against the intuition of experienced experimenters. The test example was Na6[Mo120Ce6O366H12(H2O)78]·200 H2O, a new, ring-shaped polyoxometalate cluster that was recently discovered by the researchers' automated chemical robot.

Although the flesh-and-blood experimenters were able to produce more successful crystallizations, the far more "adventurous" machine algorithm was superior on balance because it covered a significantly broader domain of the "crystallization space". The quality of the prediction of whether an experiment would lead to crystallization was improved significantly more by the machine than the human experimenters. A series of 100 purely random experiments resulted in no improvement. In addition, the machine discovered a range of conditions that led to crystals which would not have been expected based on pure intuition. This "unbiased" automated method makes the discovery of novel compounds more probably than reliance on human intuition. The researchers are now looking for ways to make especially efficient "teams" of man and machine.