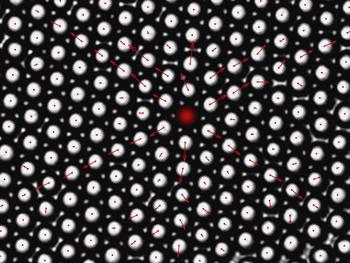 Remarkable liquid materials called colloids stiffen under impact. Researchers funded by the SNSF have studied the effect of powerful impacts such as those produced by firearms or micrometeorites.

At first glance, colloids resemble homogeneous liquids such as milk or blood plasma. But in fact they consist of particles in suspension. Some colloids have remarkable properties: they may stiffen following an impact and absorb surface shocks. This property is of interest for many applications, from bulletproof vests to protective shields for satellites. Researchers funded by the Swiss National Science Foundation (SNSF) found that how these colloids work can change dramatically in response to very strong impacts. The scientists have also developed a model that makes these properties easier to understand.

SNSF professor Lucio Isa and his team at ETH Zurich create so-called two-dimensional colloidal crystals. The crystals consist of silica beads several thousandths of a millimetre in diameter in a mixture of water and glycerine. In collaboration with Chiara Daraio of Caltech (USA) and Stéphane Job at the Institut supérieur de mécanique de Paris, the researchers studied how this type of material absorbs shocks.

The team observed that when the colloidal particles are micrometre-sized, the force and speed of impact change how the shocks are absorbed. Below a certain threshold, the viscosity of the liquid is the determining factor, and classical models describe the phenomenon very well. "You have to imagine these tiny glass beads in their liquid," says Isa. "During an impact, the beads move and disperse the fluid around them, more or less rapidly depending on its viscosity. The movement of the fluid is what causes the whole thing to stiffen."

When the shock is particularly intense, the liquid no longer flows between the beads, and they deform. "In this situation, the physical properties of the beads strongly influence shock absorption, and the usual equations no longer apply," says Isa.

Impact of a bullet

For the particles to have an effect, the impact must be extremely intense, such as that caused by a firearm or micrometeorites (objects the size of grains of sand capable of hitting satellites at the speed of ten kilometres per second).

"It was not easy to generate impacts of this intensity in the laboratory," explains Isa. To do so, the researchers covered a small percentage of the silica beads with gold. When exposed to pulsed laser light, the gold evaporated, producing a powerful shock wave in the colloid comparable to that caused, say, by the impact of a micrometeorite.
Ultra-high-speed cameras recorded the action through the lens of a microscope.

"Colloids displaying such properties are really interesting materials to study," says Isa. "For instance, they may even be used for the future development of shields protecting satellites against micrometeorite impacts."

This research was conducted at ETH Zurich, Supméca – Institut supérieur de mécanique de Paris and Caltech. The research was funded by the SNSF and by the Metaudible project under the aegis of the French National Research Agency (ANR) and the Fondation de Recherche pour l'Aéronautique et l'Espace (FRAE).