New ways to use biomass 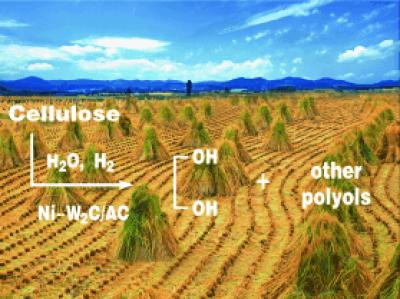 The expense of using precious-metal catalysts is avoided in the high-yielding conversion of cellulose to ethylene glycol (see picture; AC=activated carbon). This process occurs in up to 29 percent yield over a tungsten carbide catalyst, and in up to 61 percent yield when the catalyst is promoted with a small amount of nickel. An attractive feature of this reaction is the low yields of other polyols with respect to ethylene glycol.

Alternatives to fossil fuels and natural gas as carbon sources and fuel are in demand. Biomass could play a more significant part in the future. Researchers in the USA and China have now developed a new catalyst that directly converts cellulose, the most common form of biomass, into ethylene glycol, an important intermediate product for chemical industry. As reported in the journal Angewandte Chemie, the catalyst is made of tungsten carbide and nickel on a carbon support.

Currently, biomass is mainly used in the form of starch, which is degraded to make sugars and then fermented to make ethanol. It would be cheaper to use cellulose, which is the main component of plant cell walls and thus the most plentiful organic compound on Earth. In contrast to starch from corn and grain, cellulose is not a food, so there would be no competition between its use as food or as raw material and fuel. At the moment, cellulose is mainly processed by fermentation. However, splitting cellulose into its individual sugar components, which can then be fermented, is a slow and cost-intensive process. The direct conversion of cellulose into useful organic compounds is thus an attractive alternative.

Initial reactions using various noble-metal catalysts have been developed. Their disadvantage is that large amounts of expensive metal are needed to break down the cellulose. On an industrial scale, these processes are thus not economical. A less costly and more effective catalyst is needed.

A team led by Tao Zhang at the Dalian Institute of Chemical Physics (China) and Jingguang G. Chen at the University of Delaware (Newark, USA) has now developed just such a system. The catalyst is made of tungsten carbide deposited on a carbon support. Small amounts of nickel improve the efficiency and selectivity of the catalyst system: a synergetic effect between the nickel and tungsten carbide not only allows 100% conversion of cellulose, but also increases the proportion of ethylene glycol in the resulting mixture of polyalcohols to an amazing 61%. Ethylene glycol is an important intermediate in the chemical industry. For example, in the plastics industry it is needed for the production of polyester fibers and resins, and in the automobile industry it is used as antifreeze.