Investigating micelles, as easy as ABC 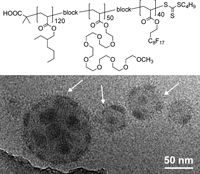 German scientists have used cryogenic transmission electron microscopy to investigate the fluorinated domains within ABC triblock copolymer micelles. Christoph Böttcher from Freie Universität Berlin, André Laschewsky from Universität Potsdam, and their colleagues, have shown using cryo-transmission electron microscopy (cryo-TEM) that fluorocarbon domains may be dispersed throughout the hydrocarbon core of ABC triblock copolymer micelles. ‘Multicompartment micelles of tri-block copolymers (composed of a lipo­philic, a hydrophilic, and a fluoro­philic block) aggregate to form different individual morphologies, which can only be revealed in detail by suitable high resolving microscopic techniques’ explains Böttcher. ‘Among them are so called raspberry-like micelles with fluorinated domains, thought to be located at the core-corona interface. However, the exact shape and three-dimensional organisation of the fluorinated domains is often unknown and can not be simply retrieved from single projection images.’ The group have proposed a model in which the hydrophilic blocks segregate to minimize their contact with the surrounding hydrophobic core, by forming inverted micellar domains dispersed within the multi­com­partment micelles. ‘We found that the fluorinated domains are not only tethered to the core-corona interface as expected,’ says Böttcher, ‘they were surprisingly also found deep within the lipophilic core.’ ‘The design of assemblies with separate nanoscopic compartments is a major challenge in modern supramolecular chemistry,’ says Böttcher, explaining that these assemblies could be used for the transport of drugs, and their selective release at a target area. ‘Most desirable is a three-dimensional structural characterization of supramolecular assemblies’ he adds. He believes that this type of research will help researchers to understand the factors which govern the assembly processes, and allow them to fine-tune synthesis strategies. Original article: Berlepsch et al.; Chem. Commun. 2009