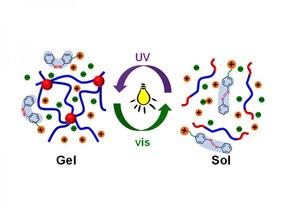 Researchers have developed a novel strategy to control the shapes of polymeric materials by utilizing photoresponsive molecular switches, which may evolve tractable stimuli-responsive soft materials.

Ionic liquids (ILs) are liquid-state salts at room temperature and are high-potential materials in electrochemistry and materials science because of their unique properties such as high chemical and thermal stabilities, negligible volatility and flammability, and suitable ionic conductivity. The group previously developed ion gels suitable for industrial application by combining ILs and network polymer molecules.

The group reported that thermoresponsive triblock copolymers in a conventional IL containing a small amount of azobenezene-IL (a photoresponsive molecule) showed reversible physical property changes upon by light irradiation. Sol and gel states of the mixture were tunable by light, i.e., the gel state was formed under UV light and the sol state was formed under visible light. Photoisomerization of azobenzene in the IL triggered the macroscopic response. The composite also possessed similar ion conductivity as conventional ILs.

"This is the first application of an ionic liquid functioning as a molecular switch," says corresponding author Masayoshi Watanabe, Professor, Yokohama National University. "The important point in this system is that photo-responsive azobenzene is added to a solvent. Compared to conventional stimuli-responsive polymers, the solubility of the mixture can be controlled by the structural change of the solvent, not that of the polymer."

This system could aid the development of a novel electrolyte that exhibits photoreversible viscoelastic changes and could be applied to other polymers for the production of innovative stimuli-responsive soft materials, e.g., in printing and biomedicine.