Squid skin could be the solution to camouflage material 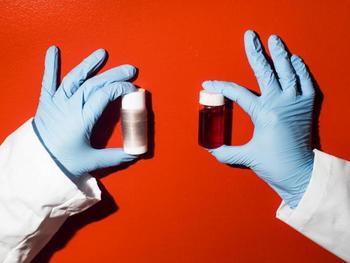 Cephalopods -- which include octopuses, squid, and cuttlefish -- are masters of disguise. They can camouflage to precisely match their surroundings in a matter of seconds, and no scientist has quite been able to replicate the spectacle. But new research by Leila Deravi, assistant professor of chemistry and chemical biology at Northeastern, brings us a step closer.

The chromatophore organs, which appear as hundreds of multi-colored freckles on the surface of a cephalopod's body, contribute to fast changes in skin color. Deravi's group describes its work in isolating the pigment granules within these organs to better understand their role in color change. The researchers discovered these granules have remarkable optical qualities and used them to make thin films and fibers that could be incorporated into textiles, flexible displays, and future color-changing devices. Deravi's lab collaborated with the U.S. Army Natick Soldier Research, Development, and Engineering Center for the study.

Chromatophores come in shades of red, yellow, brown, and orange. They are similar to the freckles on human skin that appear over time. But in cephalopods, these freckles open and close within a fraction of a second to give rise to a continuously reconfiguring skin color. Underneath the chromatophores is a layer of iridophores that act as a mirror. Together, these organs reflect all colors of visible light.

By removing individual pigment particles from the squid, Deravi was able to explore the breadth of their capabilities as static materials. One particle is only 500 nanometers in size, which is 150 times smaller than the diameter of a human hair. Deravi's team layered and reorganized the particles and found they could produce an expansive color pallet.

"We're showing these pigments are a powerful tool that can produce ultra-thin films that are really rich in colors," Deravi said.

Her team also discovered the pigments can scatter both visible and infrared light. This enhances brightness and light absorption and affects how a final color is perceived. And when Deravi engineered a system that included a mirror -- mimicking the layout of organs that squids have naturally--she was able to further enhance the perceived color through scattering light through and off the granules. This process could potentially be replicated on functional materials like solar cells to increase the absorption of sunlight, Deravi said.

"From a scientific and technical engineering perspective, understanding how light scattering affects color is very important, and this is an exciting new development in the field of optics in biology," said Richard Osgood, a collaborator from the U.S. Army Natick Soldier Research, Development, and Engineering Center. "This is an unusual harnessing of optics and physics knowledge in scattering to understand biological systems."

The researchers made spools of fibers from the squids' pigment particles and are now exploring uses for the material. The fibers are so visually interesting that it's not difficult to imagine weaving them into fabric for clothing or other art forms. But perhaps the most exciting possible application is wearable, flexible screens and textiles that are capable of adaptive coloration. Osgood said the research could allow the Army to create new capabilities for soldiers.

"For more than a decade, scientists and engineers have been trying to replicate this process and build these devices that can color match, color change, and camouflage just like the cephalopods, but many of them come nowhere near the speed or dynamic range of color that the animals can display," Deravi said. "Cephalopods have evolved to incorporate these specific pigment granules for a reason, and we're starting to piece together what that reason is."