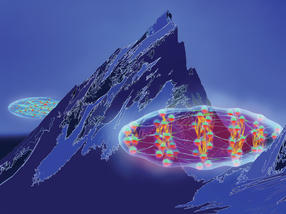 A cigar-shaped gas of magnetic atoms can support a roton mode: a modulation in the atom spatial organization at a given wavelength, forming a saddle on the energy mountain ridge of its elementary excitations.

An Innsbruck team of experimental physicists, in collaboration with theorists from Innsbruck and Hannover, has for the first time observed so-called roton quasiparticles in a quantum gas. Empirically introduced by Landau to explain the bizarre properties of superfluid liquid Helium, these quasiparticles reflect an "energy softening" in the system as precursor of a crystallization instability. The new work published in Nature Physics demonstrate similar phenomena in the quantum-gas phase thanks to magnetic interactions, paving the way for a novel understanding of paradigmatic states of quantum fluids, such as supersolids.

Discovered in liquid helium about 80 years ago, superfluidity is a counterintuitive phenomenon, in which quantum physics and particle-wave duality manifest at the macroscopic level. Since then, it has yielded many advances in understanding quantum matter, yet leaving mysterious some of its features. A hallmark of superfluidity is the existence of so-called “quasi-particles”, i.e. elementary excitations dressed by interactions.

The behavior of such a special fluid is mainly dictated by two types of excitations at low temperature, as their moderate energy cost allows to easily excite them. The first ones are the phonon modes, the well-known long-wavelength sound-wave quanta. The second ones, much more bizarre and intriguing, are massive quasi-particles named rotons. They have large momenta, and, contrarily to the common (quasi)particles for which the energy increases with the momentum, the roton dispersion relation exhibits a minimum at a finite momentum, called roton momentum. This unusual behavior expresses the tendency of the fluids to build up short-wavelength density modulation in space, precursor of a crystallization instability. This behavior arises from a remarkable crosstalk (or correlations) between the particles, owing to the extremely high density of the fluid.

Ultracold quantum gases and, in particular, Bose-Einstein condensates, first realized in 1995, offer another paradigm of superfluidity, where, because of the much lower densities, the roton mode is absent. However, in 2003, theoreticians suggested that roton excitations might also occur in gaseous condensates for special types of interactions among particles.

In an international first the Innsbruck scientists realized a Bose-Einstein condensate of erbium atoms in 2012. The strong magnetic character of these atoms leads to an extreme dipolar behavior of the quantum system. With this model system, they have already been able to detect several dipolar few- and many-particle effects. The group has now succeeded in preparing a Bose-Einstein condensate of about 100,000 erbium atoms in such a way that a roton mode arises. “We use a cigar-shaped trap of laser light and orient the atomic dipoles transversely to it thanks to a magnetic field,” explains first author Lauriane Chomaz. In this geometry, the atomic dipoles attract each other when they sit along the short direction of the cigar and repel when they sit along the long one. “The long-range character of the dipolar interaction introduces a cross-talk between the different directions of the cigar trap and the attractive/repulsive features of the interaction in this trap”. This energetically favors a modulation of the cloud along the long direction of the cigar, with a wavelength matching the cigar short length. This is the roton excitation. “By additionally quenching the strength of the interparticle interactions, we can populate the roton mode,” says Chomaz.

The successful detection of this long-awaited quasiparticle paves the way for further research into superfluidity. In addition, it also creates possibilities to explore a paradoxical state of matter that simultaneously shows both the properties of solids and superfluids. The first evidence of supersolid states was presented last year in hybrid systems of atoms and light. Magnetic atoms could offer a different perspective to direct access supersolid phase of matter, the Innsbruck researchers are convinced. Finally, this breakthrough confirms the potentialities offered by dipolar gases toward new paradigms of quantum fluids, as also previously demonstrated with the discovery of dipolar quantum droplets in the group of Tilman Pfau in Stuttgart.