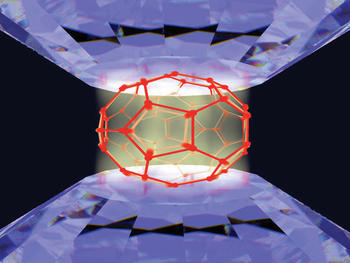 Light-induced superconductivity in K3C60 was investigated at high pressure in a Diamond Anvil Cell.

A team of scientists of the Max Planck Institute for the Structure and Dynamics of Matter (MPSD) at the Center for Free-Electron Laser Science in Hamburg investigated optically-induced superconductivity in the alkali-doped fulleride K3C60under high external pressures. This study allowed, on one hand, to uniquely assess the nature of the transient state as a superconducting phase. In addition, it unveiled the possibility to induce superconductivity in K3C60 at temperatures far above the -170 degrees Celsius hypothesized previously, and rather all the way to room temperature.

Unlike ordinary metals, superconductors have the unique capability of transporting electrical currents without any loss. Nowadays, their technological application is hindered by their low operating temperature, which in the best case can reach -70 degrees Celsius. Researchers of the group of Prof. A. Cavalleri at the Max Planck Institute for the Structure and Dynamics of Matter (MPSD) in Hamburg have routinely used intense laser pulses to stimulate different classes of superconducting materials. Under specific conditions, they have detected evidences of superconductivity at unprecedented high temperatures, although this state persisted very shortly, just for a small fraction of a second.

An important example is that of K3C60, an organic molecular solid formed by weakly-interacting C60“buckyball” molecules (60 carbon atoms bond in the shape of a football), which is superconducting at equilibrium below a critical temperature of -250 degrees Celsius. In 2016, Mitrano and coworkers at the MPSD discovered that tailored laser pulses, tuned to induce vibrations of the C60 molecules, can induce a short-lived, highly conducting state with properties identical to those of a superconductor up to a temperature of at least -170 degrees Celsius - far higher than the equilibrium critical temperature.

In their most recent investigation, A. Cantaluppi, M. Buzzi and colleagues at MPSD in Hamburg went a decisive step further by monitoring the evolution of the light-induced state in K3C60 once external pressure was applied by a diamond anvil cell. At equilibrium, when pressure is applied, the C60 molecules in the potassium-doped fulleride are held closer to each other. This weakens the equilibrium superconducting state and significantly reduces the critical temperature. “Understanding whether the light-induced state found in K3C60 responds in the same way as the equilibrium superconductor is a key step towards uniquely determining the nature of this state and can provide new hints to unveil the physical mechanism behind light-induced high-temperature superconductivity”, says Alice Cantaluppi.

K3C60 was systematically investigated, in the presence of photo-excitation, for pressures varying from ambient conditions up to 2.5 GPa, which corresponds to 25,000 times the atmospheric pressure. The authors measured a strong reduction in photo-conductivity with increasing pressure. Such behaviour is very different from that found in conventional metals, while it is fully compatible with the phenomenology of a superconductor, thus standing for a first unambiguous interpretation of the light-induced state in K3C60 as a transient superconducting phase. “Importantly”, says Michele Buzzi, “we observed that for stronger optical excitations, we can obtain an incipient, transient superconductor at temperatures far above the -170 degrees Celsius hypothesized previously, and rather all the way to room temperature.”

A universal picture able to describe the physical mechanism behind the phenomenon of light-induced high-temperature superconductivity in K3C60 is still missing and the ultimate goal of obtaining a stable room-temperature superconductor is not around the corner yet. Nonetheless, the novel approach introduced by the MPSD team, which combines optical excitation with the application of other external stimuli, as external pressure or magnetic fields, shall pave the way in this direction, allowing for the generation, control, and understanding of new phenomena in complex materials.