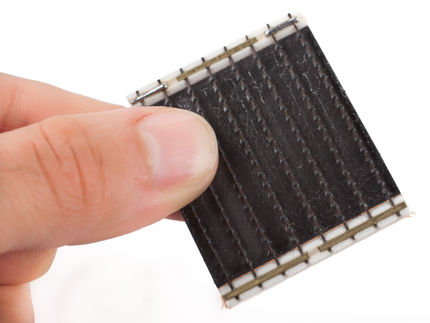 They can tailor their actuators to individual customer requirements.

In order to save energy, aerodynamics is important for cars and aircraft. However, technologies controlling saving of energy are only designed for one speed range. Researchers at Technische Universität Kaiserslautern have developed a more flexible method: Thanks to a so-called shape memory wire, the "intelligent material" can automatically adapt its shape to changing conditions. It can also be tailored to customer requirements and integrated into existing components. The researchers market their material in their start-up “CompActive.” They will present this material at the Hannover Messe from 1 to 5 April at the Rhineland-Palatinate research stand.

In search of prey, eagles circle slowly in the air. Their fan-shaped spread feathers at their wing ends ensure that they are travelling as efficiently as possible at relatively low speed. Thanks to their wings, however, the birds adapt to the new conditions also during a fast nosedive.

Aircraft have not yet become as flexible as birds of prey. There are technologies on the market that help to improve efficiency. These include, for example, so-called winglets, a kind of curved extension at the tips of the wings. “Turbulators are another example,” says Dr Moritz Hübler from the Institute for Composite Materials (IVW) at the Technische Universität Kaiserslautern (TUK). “These are a large number of small disturbing surfaces that stabilize the flow on the wing surface. This allows pilots to fly more slowly,” continues his research colleague Patricia Schweitzer. Both have one thing in common: they are only rigid components that do not adapt automatically during flight. “Here, aerodynamics of the aircraft is only designed for certain speeds,” says Hübler.

The technology on which the team around Hübler and Schweitzer is working is similarly flexible as the eagle's wing. It adapts automatically to different speeds and temperatures. Wires made of a shape memory alloy consisting of a nickel-titanium compound are used. “This is how experts describe the phenomenon that these wires return to their old form after being deformed,” explains Hübler. “When the wires are heated, for example by electric current, they contract.” The wires are applied to a flexible plate made of composite material. Similar to our musculature, a contraction of the wires causes the material to bend.

“Our active material requires less volume and has a lower weight than conventional techniques such as compressed air or electric motors,” explains Schweitzer. They can tailor their modules, or actuators, as the team calls them, to individual customer requirements. “We offer different sizes and they can be used on different materials, such as fibre-reinforced plastic or metal,” Schweitzer continues. The actuators can also be applied to components in different ways and integrated into electrical systems. “Bonded and screwed joints are possible as well as soldered connections or plugging onto a brass wire,” Schweitzer goes on to explain. The team has already patented the material structure. In their start-up “CompActive”, Hübler and Schweitzer develop it to market maturity together with their three companions Daniel Vogelsanger, Nicolà Hammann and Nils Neblung.

Many new functions are conceivable with this “intelligent material”, such as gap- and bend-free aircraft flaps that automatically improve aerodynamics for different speeds and thus save energy. In flight tests, IVW researchers and partners have already been able to show that their material can also be used in turbulators: they could be easily extended at the touch of a button. “This allows slower, steeper and safer landing approaches without compromising efficiency,” says Hübler.

In order to reduce fuel consumption, a similar area of application is also possible for vehicles. Hübler cites another example: “This technology could be automatically used to achieve optimum aerodynamics at any time by means of existing sensors, regardless of whether you are driving in the city or on the motorway.”

Another field of application is ventilation and heating systems, but the technology is also interesting for a cooling system for protective helmets in the sports sector or for innovative lamp designs.

At the Hannover Messe, the researchers will present a model of an aircraft wing in which six actuators are installed that can be controlled individually. They also present a technique in which their material is contracted and thus remains in a bent state without consuming energy. “We use a simple latch with which we fix the system in this state; it resembles latches in a garden gate, for example,” says Schweitzer. They have also developed another option for this technology, using a kind of click system that is comparable to that of a ballpoint pen, which ensures that the refill remains outside.

The start-up project is funded by the Federal Ministry of Economics and Technology (BMWi) as an “EXIST research transfer project” at the Institute for Composite Materials in the first funding phase until the beginning of 2020. In their work, the young entrepreneurs are supported by TUK and the Institute for Composite Materials. The team has already established contact with customers and is planning a first series production for the coming year.