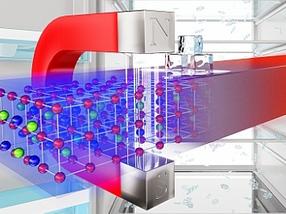 The magnetocaloric effect: Brought into a magnetic field, the temperature of certain materials changes significantly. Scientists want to use this effect to build eco-friendly cooling devices.

Later during this century, around 2060, a paradigm shift in global energy consumption is expected: we will spend more energy for cooling than for heating. Meanwhile, the increasing penetration of cooling applications into our daily lives causes a rapidly growing ecological footprint. New refrigeration processes such as magnetic cooling could limit the resulting impact on the climate and the environment. Researchers at the Helmholtz-Zentrum Dresden-Rossendorf (HZDR) and the Technische Universität Darmstadt have taken a closer look at today's most promising materials. The result of their work is the first systematic magnetocaloric material library with all relevant property data, which they have published now in the journal Advanced Energy Materials.

Artificial cooling using conventional gas compression has been around in commercial household applications for about one hundred years. However, the technology has barely changed during this time. Experts estimate that around one billion refrigerators based on this technology are in worldwide use today, in ever-growing numbers. "Cooling technology is now regarded as the largest power consumer in our own four walls. The potential for environmental pollution caused by typical coolants is just as problematic," Dr. Tino Gottschall from the Dresden High Magnetic Field Laboratory at HZDR describes the motivation of his research.

The "magnetocaloric effect", which could become the heart of future cooling technologies, is a process where certain elements and alloys suddenly change their temperature when exposed to a magnetic field. There is a whole series of such magnetocaloric substances already known from research. "But whether they are suitable for household and industrial applications on a large scale – this is a whole different question," adds Prof. Oliver Gutfleisch from the Institute of Materials Science at the Technische Universität Darmstadt.

The scientists were collecting data on substance properties to clarify these issues. However, they quickly ran into difficulties. "We were particularly surprised that only a few results from direct measurements can be found in the specialist literature," reports Gottschall. "In most cases, these parameters were indirectly derived from the observed magnetization data. We found that neither the measurement conditions, such as the strength and the profile of the applied magnetic field, nor the measuring regimes, are comparable. Consequently, the results do not match.“

To dispel the inconsistencies in the previously published material parameters, the scientists devised an elaborate measurement program, which covers the entire spectrum of the currently most promising magnetocaloric materials and their relevant material properties. By coupling high-precision measurements with thermodynamic considerations, the researchers from Darmstadt and Dresden were able to generate consistent material data sets. The scientists now are presenting this solid database that can facilitate the selection of suitable materials for various magnetic cooling applications.

Which materials can take on gadolinium?

The suitability of a material for magnetic cooling purposes is ultimately determined by various parameters. It requires the proper combination of material properties to compete with well-established cooling technologies. To describe the most important properties for tomorrow’s cooling materials, Gottschall states: "The temperature change achieved at room temperature should be large, and as much heat as possible should be dissipated at the same time."

To enter future mass applications, these substances must not possess harmful characteristics, both in terms of environment and health. "In addition, they should not consist of raw materials that are classified as critical due to supply risks and difficult in terms of replacement in technological applications," explains Gutfleisch. "In the overall assessment of technological processes, this aspect is often neglected. A mere focus on physical properties is no longer sufficient today. In this respect, magnetic cooling is also a prime example of the fundamental challenges coming along with the current energy transition, which will not be possible without sustainable access to suitable materials."

At ambient temperature, the prime magnetocaloric standard is still made of gadolinium. If the rare–earth element is brought into a magnetic field of 1 Tesla, the scientists measure a temperature change of almost 3 degrees Celsius. Keeping the economic viability of future magnetic cooling devices in mind, the generation of such field strengths will most likely rely on commercial permanent magnets.

Suitable materials: A look into the future

Despite its outstanding properties, the prospects of using gadolinium in household cooling devices are rather unrealistic. The element is one of those rare-earth metals that are classified as critical when it comes to a secure, long-term supply. Given an equal design, heat exchangers made of iron-rhodium alloys could dissipate even larger quantities of heat per cooling cycle. Nevertheless, the platinum group metal rhodium is likewise in the list of raw materials singled out by the European Commission due to a high criticality.

The researchers however have found candidate materials that are readily available in the near future and, at the same time, with a promising performance. Intermetallic compounds consisting of the elements lanthanum, iron, manganese and silicon, for example, in which hydrogen is stored in the crystal lattice, can even outperform gadolinium in terms of heat that could be transferred out of the refrigerator compartment.

Others could follow suit: Researchers at HZDR and TU Darmstadt are working hard on expanding the range of magnetic cooling materials. In close cooperation, scientists of both institutions are preparing a new series of experiments investigating the properties of magnetocaloric substances. At the Dresden High Magnetic Field Laboratory for example, they are set to study how these substances behave in pulsed high magnetic fields. The wider focus of future research lies on a given material's response to the simultaneous impact of different stimuli like magnetic fields, strain and temperature, as well as the construction of efficient demonstrators.