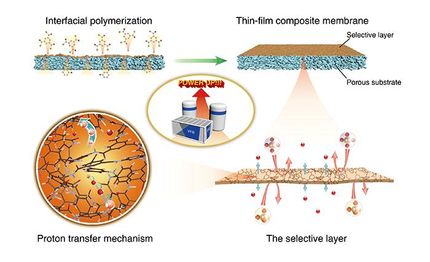 The fabrication and function of the thin-film composite membrane.

Chinese researchers under the direction of Profs. LI Xianfeng and ZHANG Huamin from the Dalian Institute of Chemical Physics (DICP) of the Chinese Academy of Sciences recently developed an ultrathin ion-conducting membrane with high selectivity and conductivity that can boost the power of flow batteries.

Membranes are key components of flow batteries. They separate reactive materials in the negative and positive chambers while permitting the transfer of ions across the membrane at the same time. The efficiency of flow batteries greatly depends on the ion selectivity and conductivity of these membranes.

Based on their previous study (Environ.Sci., 2011, 4, 1676), LI's group found that the key challenge for ion-conducting membranes is the "trade-off" between ion selectivity and conductivity. Porous membranes using the traditional phase inversion method of construction had tortuous and poorly connected pores, resulting in low ion conductivity.

To this end, the researchers utilized interfacial polymerization to fabricate a thin-film composite membrane. This membrane has an ultra-thin cross-linked polyamide selective layer and a highly conductive support layer. The ultrathin selective layer is only 180 nm thick. It offers a very short ion-transfer pathway and has very low area resistance.

The cross-linked polyamide has free volume between the size of hydronium and hydrated vanadium ions. Vanadium ions, due to their size, are highly resistant to crossover, thus endowing the membrane with high ion selectivity.

Flow batteries with a thin-film composite membrane could work at higher current density. This would allow the use of a smaller battery stack to generate higher power and reduction in the cost of battery stacks.

The proton transfer mechanism in polyamide selective layers can be further understood by utilizing the Grotthuss mechanism to make theoretical calculations of proton transfers along water chains and carboxyl groups. Results provide new ideas for designing advanced ion-selective membranes that can also be applied to flow batteries.