Will the future's super batteries be made of seawater? 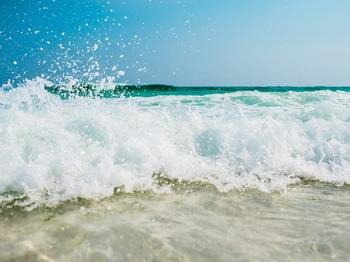 We all know the rechargeable and efficient lithium ion (Li-ion) batteries sitting in our smartphones, laptops and also in electric cars.

Unfortunately, lithium is a limited resource, so it will be a challenge to satisfy the worlds' growing demand for relatively cheap batteries. Therefore, researchers are now looking for alternatives to the Li-ion battery.

A promising alternative is to replace lithium with the metal sodium - to make Na-ion batteries. Sodium is found in large quantities in seawater and can be easily extracted from it.

The Na-ion battery is still under development, and researchers are working on increasing its service life, lowering its charging time and making batteries that can deliver many watts, says research leader Dorthe Bomholdt Ravnsbæk of the Department of Physics, Chemistry and Pharmacy at University of Southern Denmark.

She and her team are preoccupied with developing new and better rechargeable batteries that can replace todays' widely used Li-ion batteries.

For the Na-ion batteries to become an alternative, better electrode materials must be developed - something she and colleagues from the University of Technology and the Massachusetts Institute of Technology, USA, have looked at in a new study published in the journal ACS Applied Energy Materials.

But before looking at the details of this study, let's take a look at why the Na-ion battery has the potential to become the next big battery success.

An obvious advantage is that sodium is a very readily available resource, which is found in very large quantities in seawater. Lithium, on the other hand, is a limited resource that is mined only in a few places in the world, explains Dorthe Bomholdt Ravnsbæk.

Another advantage is that Na-ion batteries do not need cobalt, which is still needed in Li-ion batteries. The majority of the cobalt used today to make Li-ion batteries, is mined in the Democratic Republic of Congo, where rebellion, disorganized mining and child labor create uncertainty and moral qualms regarding the country's cobalt trade.

In their new study, Dorthe Bomholdt Ravnsbæk and her colleagues have investigated a new electrode material based on iron, manganese and phosphorus.

The new thing about the material is the addition of the element manganese, which not only gives the battery a higher voltage (volts), but also increases the capacity of the battery and is likely to deliver more watts. This is because the transformations that occur at the atomic level during the discharge and charge are significantly changed by the presence of manganese.

Similar effects have been seen in Li-ion batteries, but it is very surprising that the effect is retained in a Na-ion battery, since the interaction between the electrode and Na-ions is very different from that of Li-ions, says Dorthe Bomholdt Ravnsbæk.

She will not try and predict when we can expect to find seawater-based Na-ion batteries in our phones and electric cars, because there are still some challenges to be solved.

One challenge is that it can be difficult to make small Na-ion batteries. But large batteries also have value - for example, when it comes to storing wind or solar energy.

Thus, in 2019, such a gigantic 100 kWh Na-ion battery was inaugurated to be tested by Chinese scientists at the Yangtze River Delta Physics Research Center. The giant battery consists of more than 600 connected Na-ion battery cells, and it supplies power to the building that houses the center. The current stored in the battery is surplus current from the main grid.