Metal-organic frameworks can separate gases despite the presence of water 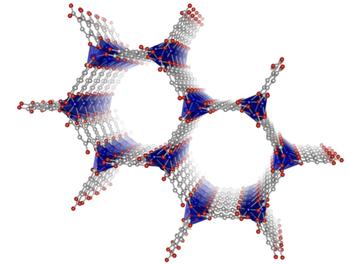 A visualization of the structure of metal-organic frameworks with the metal (cobalt, blue) at the corners and the organic structures spanning the sides (carbon, gray; oxygen, red).

Metal-organic frameworks (MOFs) are promising materials for inexpensive and less energy-intensive gas separation even in the presence of impurities such as water.

Experimental analyses of the performance of metal-organic frameworks (MOFs) for the separation of propane and propene under real-world conditions revealed that the most commonly used theory to predict the selectivity does not yield accurate estimates, and also that water as an impurity does not have a detrimental effect on the material's performance.

Short chain hydrocarbons are produced in mixtures after treatment of crude oil in refineries and need to be separated in order to be industrially useful. For example, propane is used as a fuel and propene as a raw material for chemical synthesis such as the production of polymers. However, the separation process usually requires high temperatures and pressures, and additionally the removal of other impurities such as water makes the process costly and energy-consuming.

The structure of the studied MOF offers a long-lived, adaptable, and most importantly efficient separation alternative at ambient conditions. They build on the fact that unsaturated molecules such as propene can be complexed with the material's exposed metal atoms, while saturated ones such as propane fail to do so. While research has focused on developing different metal-organic frameworks for different separation processes, the feasibility of using these materials on industrial-scale applications is commonly only gauged by relying on a theory that makes many idealizing assumptions on both the material and the purity of the gasses. Thus, it has not been clear whether these predictions hold under more complicated but also more realistic conditions.

A team of Hokkaido University researchers around Professor Shin-ichiro Noro in collaboration with Professor Roland A. Fischer's group at the Technical University of Munich conducted a series of measurements on the performance of a prototypical MOF to ascertain the material's real-world selectivity, for both completely dry frameworks and ones pre-exposed to water.

Their results recently published in ACS Applied Materials & Interfaces show that the predicted selectivities of the material are too high compared to the real-world results. It also demonstrated that water does not drastically decrease the selectivity, although it does reduce the material's capacity to adsorb gas. The team then performed quantum-chemical computations to understand why and realized that the water molecules themselves offer new binding sites to unsaturated hydrocarbons, such as propene (but not propane), thus retaining the material's functionality.

The researchers state: "We showed the power of multi-component adsorption experiments to analyze the feasibility of using an MOF system." They thus want to raise awareness of the shortcomings of commonly used theories and motivate other groups to also use a combination of different real-world measurements.