Towards Functional Glasses and Liquids 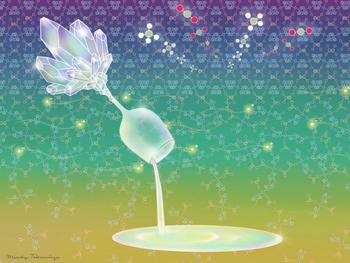 Illustration by Mindy Takamiya (CC BY 4.0)

Metal-organic frameworks (MOFs) are porous, crystalline materials that can trap compounds within their molecular cavities, giving them a wide range of applications in gas storage and separation, carbon capture, and in the catalysis of chemical reactions, to name a few. A new range of applications are now being investigated by converting crystalline MOFs into liquid and/or glassy states.

"MOFs are a relatively new class of material, and most of those developed in the last 20 years are in the crystalline state," says Satoshi Horike, a materials scientist of Kyoto University's Institute for Integrated Cell-Material Sciences (iCeMS). "Recently, we have found non-crystalline glass or liquid states in MOFs and propose they have great potential as future materials."

Horike reviewed the latest advancements and perspectives in the field, together with material chemist Susumu Kitagawa and colleagues for the journal Angewandte Chemie International Edition.

Tens of thousands of MOFs have been synthesized since they were first discovered in the late 1990s. Technology advances are now allowing researchers to uncover what happens at the molecular level when some MOFs are heated to a melting point and then cooled to produce a glass-like state. So far, researchers have reported about ten MOFs that can be melted into a liquid and/or turned into a glass state. Their melting temperatures range from 184°C to 593°C, depending on their crystal structures.

When this type of MOF is heated, its metal ions and organic ligands start to wobble within the crystals as the material melts. The bond distances in its polymer chains also lengthen as temperatures continue to rise. The structure of a MOF's crystalline state is very ordered. The glass state has a 'middle-range order', where the connections break but portions of the extended structure remain generally in place. Much more molecular fragmentation occurs when a MOF reaches the liquid state, but some of its internal structure retains an element of connectivity.

Not all of these MOFs can be transformed into glass by cooling their liquid state. Some require a mechanical grinding-like treatment for glass to form. During this process, adding certain chemicals to the material could modulate some of its physical properties, such as enhancement of proton conductivity.

Liquid and glass MOFs could provide a new state of material that demonstrates porosity, ion conductivity, and optical properties such as luminescence. They also show promise for heat storage, in energy devices, and for gas permeation. Hybrid materials incorporating glass or liquid MOFs with other materials, such as organic polymers, metal particles, or metal ions, could be used as strong adhesives in energy devices or in catalytic reactions.

The researchers suggest that scientists should revisit the huge library available for crystalline MOFs from the viewpoint of phase change to liquid and/or glass. Doing so could lead to the design of new functional materials.