Harnessing the rain for hydrovoltaics 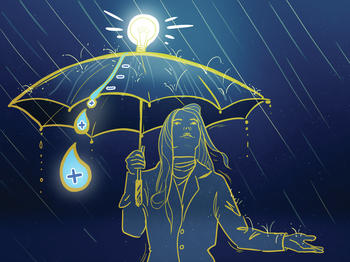 Drops sliding over surfaces can separate charges. This effect could possibly be used to generate small amounts of power where no other source is available.

Drops of water falling on or sliding over surfaces may leave behind traces of electrical charge, causing the drops to charge themselves. Scientists at the Max Planck Institute for Polymer Research (MPI-P) in Mainz have now begun a detailed investigation into this phenomenon that accompanies us in every-day life. They developed a method to quantify the charge generation and additionally created a theoretical model to aid understanding. According to the scientists, the observed effect could be a source of generated power and an important building block for understanding frictional electricity.

Water drops sliding over non-conducting surfaces can be found everywhere in our lives: From the dripping of a coffee machine, to a rinse in the shower, to an umbrella in a thunderstorm. When a drop slides over such a surface, it generates a trace of charge. Consequently, the drop collects the inverse charge. Although this charging phenomenon seems omnipresent, little is known about it.

Scientists at the MPI-P have now investigated this effect in more detail. For this, they slid drops one after another down a tilted surface of hydrophobic glass. They measured the charge collected dependent on the sliding length as well as on the charge left by previous slipping drops. They created a theoretical model that combines two opposing effects: the fast deposition of charge by successive drops, and the slow discharging of the surface behind the drops.

“The model matches our experimental observations beautifully”, says Dr. Amy Stetten, working as a Postdoc in the group of Profs. Stefan Weber and Hans-Jürgen Butt. By taking their newly developed model, the researchers hope to understand basic physical effects like frictional electricity, and also to develop surfaces that enhance this effect for power generation.

The related effect of frictional electricity is also poorly understood. However, it could be that water charging and frictional charging are related. Many of us experience this when blow-drying our hair. “When two hairs come into contact and charge up, it’s never just the two hairs, it’s the two hairs with a layer of water in between. Some experiments in the literature show that if you go down to near zero humidity, you no longer see frictional charging,” says Stetten.

From an application point of view, the effect could be used to generate small amounts of power where no other source is available. This could be the case, for example, for small, low-power sensors in isolated, rainy environments.

The researchers will continue the work to better understand how the material of the surface, or properties like surface roughness, affect the separation of charges. They aim to create materials, which separate charges more effectively so that these surfaces can be used for real-world applications.