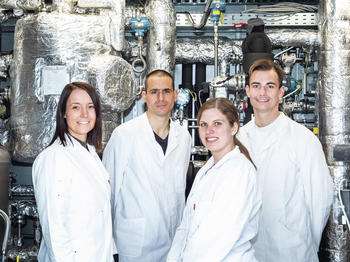 Working together with researchers from TU Graz on the further development of the OSOD H2 generator: the technical team of Rouge H2 Engineering – Christina Wölger, Gernot Voitic, Sara Kurakin, Jakob Sabitzer (from left). 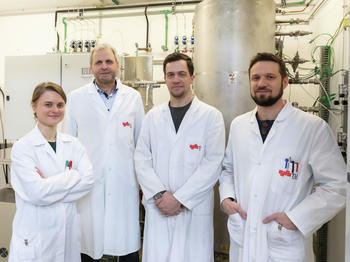 Their research laid the foundation for the success of the new hydrogen generator: the HyStORM project team at TU Graz – Karin Malli, Viktor Hacker, Sebastian Bock, Robert Zacharias (from left).

As an alternative propulsion technology in the transport sector, hydrogen is playing an important role in the energy transition. However, it is not yet suitable for mass production. Hydrogen is mainly produced centrally from fossil resources and compressed or liquefied in an expensive and energy-intensive process in order to be able to supply it to filling stations. Additionally, expensive infrastructure with high investment costs is needed there to store large quantities of hydrogen.

The Fuel Cells and Hydrogen Systems Working Group at TU Graz’s Institute of Chemical Engineering and Environmental Technology – one of the leading international groups in the field of hydrogen research – has therefore been looking for ways to make hydrogen production more attractive. As part of the HyStORM (Hydrogen Storage via Oxidation and Reduction of Metals) research project, the team led by working group head Viktor Hacker developed a so-called "chemical-looping hydrogen method", a new sustainable and innovative process for decentralised and climate-neutral hydrogen production. This award-winning research success resulted in a compact and space-saving on-site, on-demand (OSOD) system for filling stations and energy plants and is being developed and distributed by the Graz-based start-up Rouge H2 Engineering. This system is expected to become an important piece of the puzzle on the way to the widespread availability of sustainable hydrogen.

How the OSOD system works

The OSOD system is a hydrogen generator with integrated storage device in one system. Hydrogen is produced by converting biogas, biomass or natural gas into a syngas. The provided energy is then stored by means of a redox process (reduction-oxidation process) in a metal oxide, which can be stored and transported without any losses or safety risks. The subsequent demand-oriented production of hydrogen is achieved by feeding water into the system. The iron-based material is charged with steam and high-purity hydrogen is released.

This process also makes the system interesting for smaller applications, as TU Graz hydrogen researcher Sebastian Bock explains: "Current conventional processes for hydrogen production from biogas or gasified biomass require complex and cost-intensive gas purification processes such as pressure swing adsorption – a separation process in which hydrogen is isolated from the gas mixture in several steps. This works very well on a large scale, but is poorly scalable to smaller, decentralized systems. However, our process generates only high-purity hydrogen through the steam-based redox cycle anyway, so there is no need for any gas purification step at all."

For this reason, the OSOD system is freely scalable and is particularly suitable for decentralized applications with low feed-in rates in laboratories and smaller industrial systems as well as larger decentralized units such as hydrogen filling stations or hydrogen production from biogas.

In addition to the provision of high purity hydrogen, Gernot Voitic, lead project manager of R&D at Rouge H2 Engineering, points out another advantage of the new technology: "The OSOD system can switch to standby mode in the case of low demand and resume hydrogen production at any time if required. This on-demand release and integrated storage is the USP of the OSOD H2 Generator, and sets it apart from other similar products."

Rouge H2 Engineering and TU Graz researchers are already focusing on the next step. At present, the system is still operated on an industrial scale with natural gas. The working group now wants to make it usable for biogas, biomass and other regionally available raw materials. Biogas plants, for example, could thus become even more competitive in the future and, instead of electricity, also produce green hydrogen, which could be used for sustainable mobility concepts.