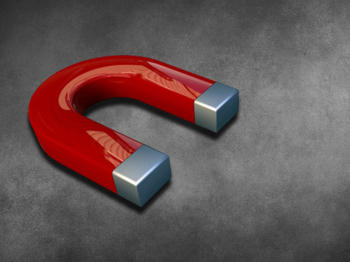 A complex process can modify non-magnetic oxide materials in such a way to make them magnetic. The basis for this new phenomenon is controlled layer-by-layer growth of each material. An international research team with researchers from Martin Luther University Halle-Wittenberg (MLU) reported on their unexpected findings in the journal "Nature Communications".

In solid-state physics, oxide layers only a few nanometres thick are known to form a so-called two-dimensional electron gas. These thin layers, separated from one another, are transparent and electrically insulating materials. However, when one thin layer grows on top of the other, a conductive area forms under certain conditions at the interface, which has a metallic shine. "Normally this system remains non-magnetic," says Professor Ingrid Mertig from the Institute of Physics at MLU. The research team has succeeded in controlling conditions during layer growth so that vacancies are created in the atomic layers near the interface. These are later filled in by other atoms from adjoining atomic layers.

The theoretical calculations and explanations for this newly discovered phenomenon were made by Ingrid Mertig’s team of physicists. The method was then experimentally tested by several research groups throughout Europe - including a group led by Professor Kathrin Dörr from MLU. They were able to prove the magnetism in the materials. "This combination of computer simulations and experiments enabled us to decipher the complex mechanism responsible for the development of magnetism," explains Mertig.