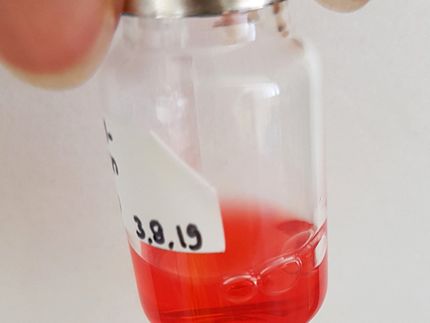 Time for climate protection is pressing. One approach to tackle this challenge is to use the greenhouse gas CO2 as a raw material for chemicals. To this end, the Fraunhofer Institute for Interfacial Engineering and Biotechnology IGB, together with partners from science and industry, has pursued a new path in the EU-funded project CELBICON. The researchers were able to produce a value-added terpenoid dye from CO2 adsorbed from air by a combination of electrochemical and biotechnological conversion.

Dry soils in Germany, heat records in the Arctic and thawing permafrost soils in Siberia. The consequences of climate change are visible across the globe. To reduce the concentration of carbon dioxide (CO2) in the atmosphere, numerous research groups are investigating how CO2 can be used as a raw material for the production of chemicals.

"Developing processes for the utilization of CO2 will be a crucial component of a future climate-friendly and resource-efficient circular economy," believes Dr. Arne Roth, who leads the Innovation Field Catalysts at the Fraunhofer Institute for Interfacial Engineering and Biotechnology IGB.

From educt to product in three steps: Adsorption, electrochemistry, biotechnology

Combined electrochemical-biotechnological processes provide a new way of using CO2 as a raw material for producing fuels and chemicals. The Fraunhofer Institute for Interfacial Engineering and Biotechnology IGB, together with partners from science and industry, has pursued this approach in the EU-funded project CELBICON and demonstrated an exemplary process chain on a pilot scale. The advantage of this approach: "By using the natural synthetic capabilities of bacteria − in addition to CO2 adsorption and electrochemical conversion − we can produce more complex molecules and, thus, value-added products that make the new process economical," says Dr. Lénárd-István Csepei, who coordinated the project at Fraunhofer IGB.

In order to use atmospheric CO2 as raw material, it must be adsorbed from the air first. For this purpose, the project partner Climeworks set up a demonstration plant on the premises of the IGB BioCat branch in Straubing. In the CO2 collectors of the plant, CO2 is adsorbed to selective filter material that is in direct contact with air blown though the system by a ventilator. The technology of the Swiss company is already being used in various industrial pilot facilities. But how can CO2 be converted into a marketable product?

Production of formic acid from CO2

CO2 can be converted into simple compounds, such as formic acid, methanol or ethanol, via electrochemical reactions in so-called electrolysis cells powered by electricity. The formed products are so-called C1 or C2 compounds, which contain only one or two carbon atoms. "However, the electrochemical conversion of CO2 only makes sense ecologically, if renewable energies are used for this purpose," explains Csepei.

Fraunhofer researchers at the Straubing-based BioCat branch have screened hundreds of different catalysts to ensure that the electrochemical conversion of CO2 is carried out efficiently and that formic acid is formed in the highest possible concentration. "With particular catalysts containing tin and a phosphate-based buffer electrolyte for the electrolysis cell, we were able to achieve the best results and produce formic acid in higher concentrations," explains electrochemical expert Dr. Luciana Vieira. "The electrolyte must neither be toxic nor inhibit enzymes for the subsequent biotechnological conversion step to work," says the scientist.

However, the simple C1 and C2 compounds can hardly be produced in an economical way through this method. The reason: The availability of renewable energies in Germany is subject to strong fluctuations - mainly due to local climatic conditions. Therefore, only a partial-load operation of maximum 2000-3000 hours per year is possible. "Electrochemical production will only become economically advantageous if the primary products can be further converted into products of higher value," explains Csepei.

Thus, the C1 compounds, such as methanol or formic acid, produced in the second, electrochemical process step serve as the sole carbon and energy source for methylotrophic bacteria applied in the third process step, the microbial fermentation. The Fraunhofer researchers selected Methylobacterium extorquens for the CELBICON process. This organism is capable of forming a complex red dye from methanol or formic acid. "The value-added dye is formed via the microbial terpene metabolism," explains Dr. Jonathan Fabarius, who was in charge of the fermentation work at IGB. Other bacteria require energy-rich sugar as substrate, instead of formic acid or methanol utilized here.

Fermentation was established as a fed-batch process on a 10-litre scale. "We were able to demonstrate that 14 percent of the formic acid used in the fermentation process is converted into terpenoid dye," emphasizes Fabarius. After the Straubing researchers were able to extract and purify the dye, they are currently working on clarifying its exact chemical structure. Fabarius looks ahead: "Our goal is to further optimize the applied bacteria by means of metabolic engineering and enzyme engineering to increase the product yield and therefore the efficiency of the overall process".

After validation of the complete process firstly on laboratory scale, Fraunhofer IGB succeeded in constructing and building an automated electrolyzer demonstration unit. The core of this unit is an electrochemical cell with an electrode area of 100 cm2. "We can use the demonstrator to control important parameters, such as temperature and pH value of the electrolytes used in long-term stability tests. For this purpose, the plant is equipped with an automatic data acquisition system," explains Dr.-Ing. Carsten Pietzka, who is researching the electrosynthesis of basic chemicals at the IGB branch in Stuttgart. The integrated system consisting of CO2 adsorber and electrolyzer demonstration unit was validated in continuous operation.

The demonstrator is designed also for the integration of electrode stacks. "This allows us to increase the production rate of formic acid and use the demonstrator for the further development of the electrolysis cell to an industrial scale," says Pietzka.

"With our new combined technology, CO2 can be electrochemically converted into C1 intermediates, and these can then be fermented into value-added compounds," summarizes project manager Csepei. With further optimization of the applied microorganisms and the fermentation step, it is also possible to produce basic chemicals such as lactic acid, isoprene or the biopolymer polyhydroxybutyric acid – in a completely carbon-neutral way.

Since CO2 - just like renewable energy - is mainly generated in a decentralized way, the combined process is particularly suitable for the production of chemicals on a smaller scale. In this way, even the decentralized production of smaller quantities can become economically viable with a product of correspondingly high quality and value.