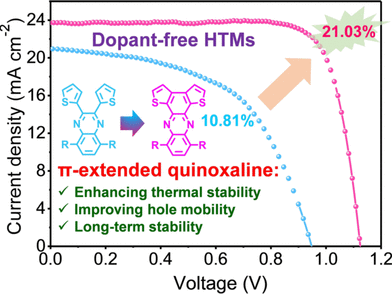 In perovskite solar cells, the perovskite light absorption layer is sandwiched between two charge-transporting layers, which collect the generated holes and electrons and transport them to the electrodes. These charge transportation layers boost the power conversion efficiency of the cells and are critical for maintaining air stability.

State-of-the-art hole transporters consist of an organic material called spiro-OMeTAD. However, to promote smooth charge-carrier mobility, they need hygroscopic additives as dopants, which reduce the stability of the perovskites in humid air.

Yongzhen Wu and colleagues from the East China University of Science and Technology are exploring flat, aromatic, nitrogen-containing compounds called quinoxalines as hole transporters. The scientists prepared two novel quinoxalines that contained additional sulfur-bearing entities called thiophenes. The idea was that the energy levels of the thiophene-containing structures matched those of the perovskite layer and enabled efficient hole extraction.

The authors also found that the devices made with the new material were more durable than those containing the doped reference materials. The dopant-free devices “maintained a dark and uniform shiny appearance within 30 days,” the scientists wrote, whereas the doped spiro-OMeTAD-containing devices “apparently faded”.

The quinoxaline-containing perovskite solar cells also resisted humid air, whereas the performance of the reference cells declined fast. The researchers concluded that the novel material not only enables, hole extraction and transportation, but it also protects the perovskite-based solar cell from moisture.