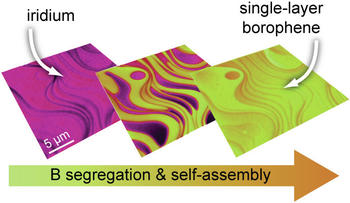 Elbow mentality in a two-dimensional material: This has recently been discovered by an international team led by the Center for Nanointegration (CENIDE) at the University of Duisburg-Essen (UDE): The physicists succeeded in creating boron layers with a height of a single atom. While growing, the material simply pushes interfering steps on the substrate out of the way.

The team led by UDE’s Prof. Michael Horn-von Hoegen aims at producing the thinnest possible layer of boron, so-called borophene, since it promises properties that could enable the construction of two-dimensional transistors. The molecular beam epitaxy used for this purpose until now results in domains that are far too small. For more precise investigations and for use in technology, however, larger areas are needed.

With their newly developed method of "segregation-enhanced epitaxy", the team uses borazine gas and an iridium substrate. The essential components of borazine are boron and nitrogen atoms that are arranged in a hexagonal honeycomb structure. By heating the iridium sample in a borazine-containing environment, the boron molecules attach themselves to the surface, followed by the evaporation of the nitrogen. Above 1100°C, the boron moves into the iridium, because at such high temperatures the iridium can absorb additional boron atoms like a sponge – up to a quarter of its own volume. When the system has cooled down, borophene – the single-atom layer of boron – precipitates on the surface of the iridium crystal. In the process, it does not grow beyond surface steps of the underlying crystal but pushes them away in all directions to form areas as large as possible.

Experts from the Interdisciplinary Center for Analytics on the Nanoscale (ICAN), led by Professor Frank-J. Meyer zu Heringdorf, were able to prove beyond doubt that the areas are exclusively composed of boron atoms and that the nitrogen has disappeared from the sample.

In a next step, the researchers want to investigate how the borophene can be detached from the iridium substrate.