Redox flow batteries: A step toward the mass market 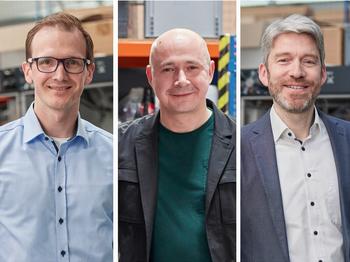 Redox flow batteries are perfect for storing large quantities of renewable energy, but they have always been too expensive for the mass market. Researchers at the Fraunhofer Institute for Environmental, Safety and Energy Technology UMSICHT have now completely redesigned the heart of a redox flow battery — the stack — and have brought about a massive reduction in material usage and costs. Their efforts have earned them the Joseph von Fraunhofer Prize.

The sun and wind cannot be controlled to meet our energy demand, which is why variable renewable energy needs to be stored until it is used. One way to do this is with redox flow batteries. They offer cycle stability — meaning their capacity does not noticeably reduce after thousands of cycles — and are not combustible, and their power and capacity can be designed to meet demand. In addition, they do not use any critical materials, and their electrolytes can be fully recovered. That said, they have always been simply too expensive for the mass market.

Researchers at Fraunhofer UMSICHT have now developed a long-term solution to this problem: They have invented a new way to manufacture the central, electrically conductive plastic so that it remains flexible and can be welded. This new process has a significant impact on redox flow batteries. “The stack that has been developed, the heart of any redox flow battery, is 40 percent more cost-effective in terms of material costs. Production costs have also been significantly reduced. The stack weighs 80 percent less than a conventional stack and is only about half the size,” says Prof. Christian Doetsch by way of summary. The stack is being marketed by the spin-off Volterion. Christian Doetsch and Lukas Kopietz from Fraunhofer UMSICHT and Dr. Thorsten Seipp from Volterion have been awarded the Joseph von Fraunhofer Prize for this development. Explaining the reasons for its decision, the jury mentioned “the spin-off and its successful exit from Fraunhofer, which serves as a prototype for marketing new manufacturing technologies.”

Stacks usually comprise 160 stacked components that are held together by a large number of screws and solid metal plates and sealed with numerous gaskets. Some of these components are injection molded, meaning they are brittle like a pencil lead due to the high pressures and temperatures required in the injection molding process. To avoid this problem, the team of researchers used similar base materials — graphite and carbon black — but approached the process in a very different way: Plastic in the form of pellets is cooled to temperatures as low as minus 80 degrees, then ground into powder and mixed with 80 percent graphite by weight. The team of researchers sends this powder through a system comprising several rollers heated to different temperatures and moving at different speeds. The powder is briefly melted between the rollers at moderate temperatures and low pressures. It is then kneaded, rolled into an “endless sheet” and finally rolled up. “This gives the new material thermoplastic properties, so it’s flexible and can be welded even though only 20 percent of it is plastic,” explains Lukas Kopietz. The stack uses no gaskets whatsoever, and even screws are unnecessary — the cells are simply welded together. Another advantage of the method is that production of bipolar plates is not simply faster and more cost-effective — there are also no limits on size. Bipolar plates up to several square meters in size can be manufactured without problems.

Implemented right through to the battery at Volterion

The second step — crucial because it also reduces costs — was to develop a continuous production process: the powder-to-roll process, in which the bipolar plates can be manufactured as an endless roll. Very thin plates can be produced in this way. In the injection molding process, the plate thickness is limited to several millimeters due to the production method, but in the powder-to-roll process it can be between 0.1 and 0.4 millimeters. This means much less material is required, which reduces the price and allows lighter, more compact stacks to be made. “This opens up totally new possibilities in design, which we have implemented right through to the complete battery at Volterion,” says Thorsten Seipp. Volterion has already built and sold more than a thousand stacks.