"Our new, detailed results could help industrial companies optimise their catalysts and make them more durable" 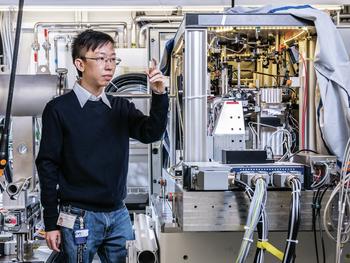 Zirui Gao, a researcher at PSI, has developed a new algorithm for experimental studies that significantly shortens the duration of certain imaging measurements that would otherwise take too long. The researchers used it to investigate ageing processes in a much-used catalyst material on the nanoscale.

PSI researchers have developed a new tomography method with which they can measure chemical properties inside catalyst materials in 3D extremely precisely and faster than before. The application is equally important for science and industry.

The material group of vanadium phosphorus oxides (VPOs) is widely used as a catalyst in the chemical industry. VPOs have been used in the production of maleic anhydride since the 1970s. Maleic anhydride in turn is the starting material for the production of various plastics, increasingly including biodegradable ones. In industry, the catalytic materials are typically used for several years, because they play an important role in the chemical reactions but are not consumed in the process. Nevertheless, a VPO catalyst changes over time as a result of this use.

In a collaborative effort, scientists from two research divisions at the Paul Scherrer Institute PSI – the Photon Science Division and the Energy and Environment Division – together with researchers at ETH Zurich and the Swiss company Clariant AG, have now investigated in detail the ageing process of VPO catalysts. In the course of their research, they also developed a new experimental method.

Clariant provided PSI with two samples: first, a sample of previously unused VPO catalyst; and second, a sample of VPO catalyst that had been used in industrial operations for four years. It had long been known that VPOs change over years of use and exhibit a slight loss of the desired properties. Until now, however, it was not completely clear which processes in the nano-structure and at the atomic scale were responsible for the observed decrease in performance.

The PSI researchers investigated this question with state-of-the-art material characterisation techniques. To make the chemical structure of the samples visible on the nanoscale, they combined two methods: The first was a specific tomography method previously developed at PSI called ptychographic X-ray computed tomography, which uses X-rays from the Swiss Light Source SLS and can non-destructively image the interior of the sample in 3D and with nanometre resolution. To this, secondly, the researchers added a local transmission spectroscopy method that additionally revealed the chemical properties of the material in each volume element of the tomograms.

"Basically, we collected four-dimensional data," explains Johannes Ihli, a researcher at PSI and one of the study authors: "We reconstructed a high-resolution 3D representation of our sample in which the individual volume elements – called voxels – have an edge length of only 26 nanometres. In addition, we have a quantitative X-ray transmission spectrum for each of these voxels, the analysis of which tells us the local chemistry."

These spectra allowed the scientists to determine for each voxel some of the most fundamental chemical quantities. These included the electron density, the vanadium concentration, and the degree of oxidation of the vanadium. Since the examined VPO catalysts are a so-called heterogeneous material, these quantities change at various scales throughout its volume. This in turn either defines or limits the material’s functional performance.

… and a new algorithm

The step-by-step procedure to obtain this data was to measure the sample for a 2D projection image, then rotate it a tiny bit, measure again, and so on. This process was then repeated at various other energies. With the previous method, about fifty thousand individual 2D images would have been necessary, and these would have been combined into about a hundred tomograms. For each of the two samples, this would have meant about one week of pure measuring time.

"The experimental stations at SLS are in great demand and booked up all year round," explains Manuel Guizar-Sicairos, likewise a PSI researcher and the principal investigator of this study. "We therefore cannot afford to carry out measurements that take so long." Data collection had to become more efficient.

Zirui Gao, lead author of the study, achieved this in the form of a new principle of data acquisition and an associated reconstruction algorithm. "For the 3D reconstruction of tomograms, you need images from many angles," Gao explains. "But our new algorithm manages to extract the required amount of information even if you increase the distance between the angles about tenfold – that is, if you only take about one-tenth of the 2D images." In this way, the researchers succeeded in obtaining the required data in only about two days of measurement, consequently saving a lot of time and thus also costs.

This is what the measurements of the two samples showed: As expected, the fresh VPO had many small pores that were evenly distributed in the material. These pores are important because they provide the surface on which catalysis can take place. In contrast, the structure of the VPO sample that had been in use for four years had changed on the nanoscale. There were larger and fewer cavities. The material in between them showed larger, elongated crystalline shapes.

Changes were also found on the molecular level: Over time, voids, also called holes, had appeared in the atomic lattice. Their existence had previously only been suspected. With the acquired chemical information at the nanoscale, the researchers were now able to confirm this hypothesis and also to show exactly where the voids were located: at the site of specific vanadium atoms that were now missing. "The fact that the relative content of vanadium decreases over time was already known," says Gao. "But we were now able to show for the first time at which point in the crystal lattice these atoms are missing. Together with our other findings, this confirms the previous assumption that these holes in the atomic lattice can serve as additional active sites for the process of catalysis."

This also implies that the increase in these imperfections is a welcome effect: They enhance the catalytic activity and thus at least partially counteract the loss of activity caused by the decreasing number of pores. "Our new, detailed results could help industrial companies optimise their catalysts and make them more durable," Gao says.