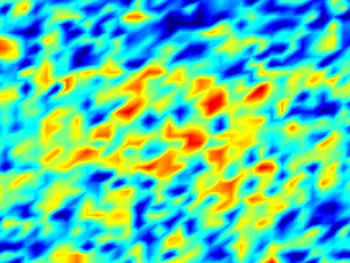 The development of this speckle pattern over time reveals microsocopic fluctuations in the material.

An international team has observed an amazing phenomenon in a nickel oxide material during cooling: Instead of freezing, certain fluctuations actually increase as the temperature drops. Nickel oxide is a model system that is structurally similar to high-temperature superconductors. The experiment shows once again that the behaviour of this class of materials still holds surprises.

In virtually all matter, lower temperatures mean less movement of its microscopic components. The less heat energy is available, the less often atoms change their location or magnetic moments their direction: they freeze. An international team led by scientists from HZB and DESY has now observed for the first time the opposite behaviour in a nickel oxide material closely related to high-temperature superconductors. Fluctuations in this nickelate do not freeze on cooling, but become faster.

We used the innovative technique of x-ray correlation spectroscopy to observe them: This allowed us to track the order of elementary magnetic moments (spins) in space and time using coherent soft x-rays. These spins arrange themselves into a stripe-like pattern upon cooling. This ordering is not perfect at higher temperatures, but consists of a random arrangement of small locally ordered regions. We found this arrangement not to be static, but to fluctuate on time scales of a few minutes. As the cooling continues, these fluctuations initially become slower and slower and the individual ordered regions grow. So far, this behaviour corresponds to what many materials show: The less thermal energy is available, the more fluctuations freeze and order grows.

What is completely unusual and had never been observed in this way before was that as the material cooled down further, the fluctuations became faster again, while the ordered areas shrank. Stripe order thus decays at low temperatures both spatially and through increasingly faster fluctuations, showing a kind of anti-freezing.

The study shows the potential of coherent soft x-rays for studying materials that are spatially non-uniform, especially those materials where new functionality arises from this spatial non-uniformity. Correlation spectroscopy with lasers has been used for many decades to study, for example, the motion of colloids in solutions. Transferred to soft x-rays, the technique can be used to follow the fluctuations of magnetic and e.g. also electronic and chemical disorder in space and time.

The experiments described here were carried out at the Advanced Light Source ALS, California.

With future x-ray sources such as BESSY III, which will produce many orders of magnitude more intense coherent x-ray radiation than current sources, it will become possible to extend this technique to faster fluctuations and shorter length scales, and thus to observe effects that have not been achievable so far.