Important step towards opening up the third dimension for molecular fabrication 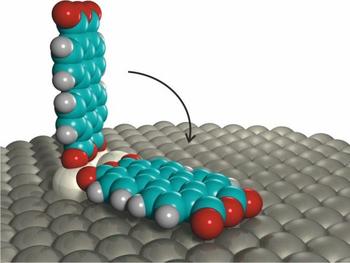 There it lies again: PTCDA molecule on a surface of silver atoms.

Three years ago, a group of physicists from Jülich successfully manipulated a single flat molecule into an upright, standing position. Their findings were published at the time in Nature. After months of experiments, they have now managed to knock the molecule back down again. The insights gained in the process represent an important step towards opening up the third dimension for molecular fabrication.

The idea of fabricating electrical components and circuits at the atomic and molecular level piece by piece, similar to the fabrication of bigger machines, is one of the central aims of nanotechnology. The current result achieved by Jülich researchers with partners from the English University of Warwick opens up new ways of achieving this aim, for example, ways of creating ultrasensitive sensors or quantum dots to store quantum information in quantum computers. Dr. Christian Wagner, head of the molecular manipulation research group, spoke to us about the latest findings.

Dr. Wagner, pushing a molecule down doesn’t really sound that complicated. Could you tell us about the challenges?

While it is of course not difficult to destroy a small, fragile thing somehow, our aim was to find out just how stable a standing molecule actually is. To do this, it is important to slowly approach the critical point– a bit like in a fracture test. In our case, we increased the temperature little by little, which shook the molecule more and more, until it eventually fell down. Although this experiment allowed us to roughly estimate the stability, we wanted to know exactly how stable the molecule is, and so we stood it back up and knocked it back down hundreds of times. It’s a bit like throwing a dice: you will only see whether or not a dice is loaded if you throw it often enough.

In addition, it is also very difficult to tell when the molecule actually falls down. The tip of the microscope is huge compared to a single molecule, and it stabilizes the molecule when it is near due to van der Waals interactions. On the other hand, the tip must be positioned right above the molecule so that we can observe whether or not the molecule is still standing. So, in contrast to the norm in quantum mechanics, the state of the molecule in this experiment only alters when we are not looking. We therefore developed a method where the tip is repeatedly moved away and repositioned close to the molecule. Eyes open; eyes closed. Or something like that!

This process occurs on a tiny scale. Can you explain it in more practical terms for us?

It’s quite simple. Imagine a tree in a storm. Instead of the wind speed, we increase the temperature, but the effect remains the same. The molecule sways more and more until it eventually falls down.

We are familiar with nanoscale fabrication from the semiconductor industry, where tiny structures are created layer by layer and partly etched away again. We may be able to fabricate such components in a different way in the future. One approach is to build them using single molecules, a bit like building something with LEGO. The molecules would then function as sensors or switches. However, often their fascinating and useful properties only remain intact when they are not lying stably and flat, but rather when they are weakly coupled to their substrate. We are the first to measure and calculate just how stable such fragile molecule configurations are and have made an important contribution that paves the way for further technological developments.

An interesting application involves quantum bits made of upright, standing molecules. Could you explain this?

One of the fascinating and useful properties of molecules is their quantum states, which can for example encode two states: zero and one. If we can couple these quantum bits or „qubits” and control them, they could be used as the building blocks for quantum computers, which are being developed throughout the world at the moment. Here too, it is advantageous if the molecules can be arranged exactly but only weakly coupled to their surroundings; for example, as standing molecules. Whether molecular qubits will actually win the race to create the best quantum computers is still open for debate, but our work certainly expands our understanding of how this could be made possible.