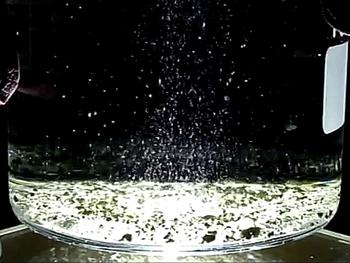 Detail from the experiment: Hydrogen bubbles emerging on the catalyst and carbonate crystals precipitating from the solution.

Nature knows several ways how to capture carbon dioxide (CO2). The most prominent one is photosynthesis, where sun light is used to fix CO2 into biomass. Nowadays, research groups around the world try hard to mimic this process and to realize artificial photosynthesis. The ultimate goal is to efficiently ‘photo-transform’ CO2 into synthetic fuels. However, nature knows also other strategies for capturing carbon dioxide, such as dissolving CO2 as carbonate (CO32-) in the oceans. Shellfish then make use of the dissolved carbonate and build CaCO3-based solid structures for shelter, which finally end up safely in rocks around the globe.

Inspired by the way shellfishes capture carbon dioxide, LMU scientists at the Nano-Institute Munich developed the vision to transform a carbon-containing fuel into a carbon-free fuel without releasing CO2 but capture carbon as carbonate. They chose alkaline methanol and devised a light-triggered system, which efficiently produced hydrogen and carbonate in the form of tiny stones. They introduced a novel multi-layer device to make maximum use of the incident light and the catalysts.

Dr. Yiou Wang, who performed most of the experimental work is a Fellow of the Alexander-von-Humboldt foundation working at the Chair for Photonics and Optoelectronics led by Prof. Jochen Feldmann. He remembers: ‘I had two moments of great excitement: First when I saw the hydrogen bubbles emerging on the catalyst and second when I noticed the carbonate crystals precipitating from the solution.’ Dr. Jacek Stolarczyk, an expert in artificial photosynthesis, adds: ‘Light is an excellent means of triggering energy conversion reactions, more convenient to use than heat and pressure.’

A possible application is the in-situ production of required hydrogen from low-cost alcohols, which avoids the risks to store and transport hydrogen before use in fuel cells. Such a carbon-neutral and light-triggered process produces hydrogen safely and efficiently, which could enable scalable fabrication and hold promise for broad and practical applications. Prof. Jochen Feldmann states: ‘Avoiding CO2-emission by binding the carbon in carbonates might generally become an important concept when using carbon-containing fuels.’