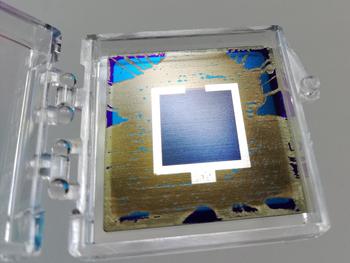 A standard silicon solar cell is combined with a perovskite top cell. This tandem solar cell could reach high efficiencies.

So-called PERC cells are used in mass production of silicon solar cells, they are considered the workhorses of photovoltaics, dominating the market. Now two teams from HZB and the Institute for Solar Energy Research in Hamelin (ISFH) have shown that such standard silicon cells are also suitable as a basis for tandem cells with perovskite top cells. Currently, the efficiency of the tandem cell is still below that of optimised PERC cells alone, but could be increased to up to 29.5% through targeted optimisation. The research was funded by the German Federal Ministry of Economics as part of a joint project.

Tandem cells made of silicon and perovskite are able to convert the broad energy spectrum of sunlight into electrical energy more efficiently than the respective single cells. Now, for the first time, two teams from HZB and ISFH Hameln have succeeded in combining a perovskite top cell with a so-called PERC/POLO silicon cell to form a tandem device. This is an important achievement, since PERC silicon cells on p-type silicon are the "workhorse" of photovoltaics, with a market share of about 50% of all solar cells produced worldwide. They are largely optimised, long-term stable and temperature stable. Therefore, it is particularly interesting for the commercialisation of a perovskite-silicon tandem technology to develop a "perovskite tandem upgrade" for PERC cells. The cooperation took place within the framework of the joint project P3T, which is funded by the Federal Ministry of Economics and coordinated by HZB.

The team at ISFH used an industry-compatible PERC process for the backside contact of the silicon bottom cells. On the front side of the wafer, another industrialisable technology was used, the so-called POLO contact, which was adapted here for the small-area proof of concept cells.

The following process steps took place at HZB: A tin-doped indium oxide recombination layer was applied as a contact between the two subcells. On top of this, a perovskite cell was processed with a layer sequence similar to that in the current world record tandem cell on n-type silicon heterojunction cells, made by HZB. The first perovskite PERC/POLO tandem cells produced in this way achieve an efficiency of 21.3% on an active cell area of about 1cm². This efficiency is thus still below the efficiency of optimised PERC cells in this feasibility study. "However, initial experimental results and optical simulations indicate that we can significantly improve the performance through process and layer optimisation," explains Dr. Lars Korte, the corresponding author of the study.

The experts estimate the Power Conversion Efficiency (PCE) of these perovskite/silicon tandem solar cells with PERC-like sub-cell technology at 29.5 %. The next steps for further efficiency increases are already clear: Dr. Silvia Mariotti from the HZB team had identified the coverage of the silicon surface by the perovskite as potential for improvement: "For this purpose, one could adapt the surface of the silicon wafers and thus quickly increase the efficiency to about 25%," says Mariotti. This is then already significantly higher than the efficiency of PERC single cells.