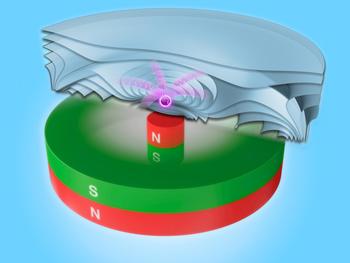 Artistic representation of rare-earth metal ions above a magnetic array with magnetizations oriented in opposite directions. This assembly yields an enhanced force of the magnetic gradient, making it suitable for rare-earth separation purposes. The energy landscape, merging information on gravity, buoyancy and magnetic field, maps the formation of hot spots of enrichment.

Some raw materials are considered critical by the European Commission. These include many representatives from the rare-earth elements group, for which supply bottlenecks are imminent and no simple substitute options in technological applications exist. With currently no economically feasible mining operations in Europe, an important source is the recycling of electronic waste that contains considerable amounts of these metals. The downside: the process of concentrating the precious material in sizable amounts depends on environmentally harmful chemicals. Researchers at the Helmholtz-Zentrum Dresden-Rossendorf (HZDR) might have a solution to this problem, as they report in Journal of Physical Chemistry C: They use simple magnets to trap rare-earth ions in solution.

Magnetic fields are a routine choice to separate particles based on their differing magnetic properties. This is a well-established technique for materials that one can strongly magnetize in an applied magnetic field, such as iron. But is this also applicable for much weaker magnetic materials, such as paramagnetic rare-earth metal ions? ”The formation of a locally confined accumulation of such ions in the vicinity of magnetic fields out of a homogeneous solution is a stunning effect observed yet requires physical insights”, says Dr. Zhe Lei of the Institute of Fluid Dynamics at HZDR. His team is unraveling the detailed underlying physics of this complex phenomenon since a while now.

From mapping a landscape to optimal levitation

The driving force acting on magnetized particles in magnetic fields depends on the strength and nature of the field, which in turn causes a magnetization characteristic for each material. Lei's team takes advantage of this fact, as the researcher explains: "In order to efficiently separate the rare earth ions that were originally distributed throughout the solution, we first have to ensure that they accumulate in one layer. We succeed in doing so with our magnet."

Its force makes it possible to put objects in a state of levitation, allowing them to accumulate in a distinct layer. The addition of water to the system also helps keep macroscopic objects in suspension, as buoyancy aids the lifting process. However, when the researchers reduce the dimension of the particles under consideration to the size of ions, they must also take into account the collisions of the surrounding molecules, which are in constant thermal motion in the solution. Their kinetic energy exceeds the magnetic energy, and the lifting effect "disappears." An additional process is required here: "We have found that a certain evaporation of water must take place at the surface of the solution for the enrichment to succeed. In the process, the density of the newly formed near-surface layer increases, resulting in a tendency to mix with the layer below. However, the upward magnetic-field gradient counteracts gravity and keeps the enrichment zone levitating, protecting it from mixing," Lei reports.
This knowledge could be applied as stand-alone technology, or it could be integrated in industry-scale solvent extraction processes. However, to design a prototype making use of this principle requires a quantitative understanding of the stability of the system. ”To tackle the problem, we needed to merge the individual contributions of gravity, buoyancy, and magnetic field into something very similar to a landscape: the so-called potential energy surface, a topological structure akin to a hiking map. But instead of showing mountains and waterfalls, it gives us an idea of the whereabouts of high metal-ion concentrations forming over time,” Lei describes the numerical part of the journey.

Low-cost magnets do the trick

One critical challenge of magnetic-separation technology is the availability of strong magnetic fields. Superconducting magnets are one way to go, but they come with a hefty price tag. Lei's team proposes a more economical approach – an intelligent array of neodymium-based magnets, the strongest permanent magnets commercially available: A rod magnet inserted into a ring magnet in such a way that the respective magnetizations point in opposite directions works best in terms of an optimal separation process.

Now, they examined how strong the field their magnet assembly delivers really is. They found that the force of the magnetic gradient of Lei´s array is around fifty times stronger than that of referential systems engineered at Harvard University in the US. ”With computational modeling, we could also quantify the exact location where our test particles accumulate under the influence of the magnetic field, regardless of their initial position in the solution. In parallel, we measured these locations via microscopy. The experimental data agree with the modeled output to such an extent that, conversely, we can now cost-effectively reconstruct the information about the magnetic field by optical measurements alone,” Lei summarizes. Meanwhile, the researchers filed for patent a method for the determination of the magnetic gradient force and its spatial distribution.