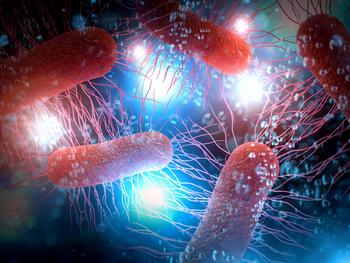 The researchers screened synthetic polymers for their ability to induce biofilm formation in a strain of E. coli (MC4100), which is known to be poor at forming biofilms. They also monitored the biomass and biocatalytic activity of both MC4100 and PHL644 (a good biofilm former), incubated the presence of these polymers, and found that MC4100 matched and even outperformed PHL644.

Birmingham scientists have revealed a new method to increase efficiency in biocatalysis, in a paper published in Materials Horizons.

Biocatalysis uses enzymes, cells or microbes to catalyse chemical reactions, and is used in settings such as the food and chemical industries to make products that are not accessible by chemical synthesis.  It can produce pharmaceuticals, fine chemicals, or food ingredients on an industrial scale.

However a major challenge in biocatalysis is that the most commonly used microbes, such as probiotics and non-pathogenic strains of Escherichia coli, are not necessarily good at forming biofilms, the growth promoting ecosystems that form a protective micro-environment around communities of microbes and increase their resilience and so boost productivity.

This problem is normally solved by genetic engineering, but researchers Dr Tim Overton from the university’s School of Chemical Engineering, and Dr Francisco Fernández Trillo from the School of Chemistry, both of whom are members of the Institute of Microbiology and Infection, set out to create an alternative method to bypass this costly and time-consuming process.

The researchers identified a library of synthetic polymers and screened them for their ability to induce biofilm formation in E. coli, a bacterium that is one of the most widely studied micro-organisms, and commonly used in biocatalysis.

This screening used a strain of E. coli (MC4100) that is widely used in fundamental science to study genes and proteins and is known to be poor at forming biofilms, and compared it to another E. coli strain PHL644, an isogenic strain obtained through evolution that is a good biofilm former.

This screening revealed the chemistries that are best suited to stimulating biofilm formation.  Hydrophobic polymers outperformed mildly cationic polymers, with aromatic and heteroaromatic derivatives performing much better than the equivalent aliphatic polymers.

The researchers then monitored the biomass and biocatalytic activity of both strains incubated the presence of these polymers, and found that MC4100 matched and even outperformed PHL644.

Further studies examined how the polymers stimulate these profound increases in activity.  Here the research indicated that the polymers precipitate in solution, and act as coagulants, stimulating a natural process called flocculation that triggers bacteria to form biofilms.

Dr Fernandez-Trillo said: “We explored a broad chemical space and identified the best performing chemistries and polymers that increase the biocatalytic activity of E. coli, a workhorse in biotechnology.  This has resulted in a small library of synthetic polymers that increase biofilm formation when used as simple additives to microbial culture.  To the best of our knowledge, currently there are no methods that provide this simplicity and versatility when promoting biofilms for beneficial bacteria.”

“These synthetic polymers may bypass the need to introduce the traits for biofilm formation through gene editing, which is costly, time-consuming, non-reversible and requires a skilled person in microbiology to implement it.  We believe this approach has an impact beyond biofilms for biocatalysis.  A similar strategy could be employed to identify candidate polymers for other microorganisms such as probiotics or yeasts, and develop new applications in food science, agriculture, bioremediation or health.”

University of Birmingham Enterprise has filed a patent application for the method and polymer additives, and is now seeking commercial partners for licensing.