Process Optimization with the Digital Twin 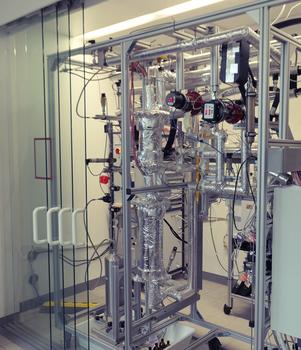 Methanol synthesis from metallurgical gases was successfully demonstrated in the miniplant.

Methanol plays an important role for industry as a commodity chemical and is presently considered one of the key energy carriers in the rising hydrogen economy. However, conventional methanol production from coal and natural gas generates large amounts of greenhouse gas emissions. With the project Carbon2Chem®, partners from industry, research and academia have made it their mission to explore processes for producing methanol from industrial waste gases using the steel industry as an example.

For the first time, the long-term stability of methanol synthesis from actual, purified blast furnace gas has now been demonstrated in a Fraunhofer ISE miniplant with a production capacity of ten liters per day over a total of more than 5,000 hours. In 2018, thyssenkrupp provided the proof-of-concept for methanol production from blast furnace gas within this project.

Fossil methanol synthesis and steel production via the blast furnace route based on coal are responsible for significant CO2 greenhouse gas emissions. Linking the two processes allows to substitute methanol from purely fossil fuels by reacting green hydrogen with the emissions from steel production. "The commitments under the Paris climate agreement can only be met by linking industrial sectors. We have to bring emissions that are difficult to avoid into a cycle," explains Dr.-Ing. Achim Schaadt, head of the Thermochemical Processes Department at Fraunhofer ISE.

The project Carbon2Chem®, which was launched in 2016 and is funded by the German Federal Ministry of Education and Research, is researching processes for converting process gases from the steel industry into basic chemicals. "In Carbon2Chem®, innovative forces from industry, applied research and universities are combined to quickly reach an implementable, systemically optimized overall solution”, emphasizes Luis F. Piedra-Garza from thyssenkrupp Steel Europe.

Fraunhofer ISE, which has been working in the field of methanol synthesis for ten years, relied on a simple and robust processing concept for the development of the miniplant. It is based on two uncooled, adiabatic reactors and an industry-style recycling of the unreacted gases. The plant went into trial operation with cylinder gases at Fraunhofer ISE in Freiburg in 2017 before being transferred to the Carbon2Chem® pilot plant in Duisburg in 2019. The exhaust gases from the neighboring integrated steel mill are treated in a gas purification system from thyssenkrupp Industrial Solutions using catalysts and sorbents from the specialty chemicals company Clariant and are devoid of catalyst poisons for the subsequent synthesis. "Personnel from thyssenkrupp Uhde Engineering Services keep the gas cleaning system running around the clock. The steel mill operates in three shifts, so there is always enough gas. We therefore have ideal conditions for continuous operation on a pilot plant scale," explains Max Hadrich, head of the Power to Liquids group at Fraunhofer ISE. In a total of more than 5,000 operating hours on site, over 1,500 liters of crude methanol were produced. The focus lay on using the purified blast furnace gas which accounts for the largest share – 85 percent – of the steel mill gases. In a long-term test lasting over 3,000 hours, no significant decline in catalyst activity was detected. This attests to the good functioning of the catalyst and plant design. "Carbon2Chem® and the collaboration with Fraunhofer ISE provide an ideal framework to underline the performance of our industrial MegaMax® methanol synthesis catalysts for the efficient and stable conversion of CO2-rich process gases," comments Dr. Andreas Geisbauer from project partner Clariant.

Process Optimization with the Digital Twin

An important prerequisite for process optimization of methanol synthesis from CO2 -rich synthesis gas is the improvement of the kinetic model for the Clariant catalyst used in Carbon2Chem®, since reactions with a recycle loop such as methanol synthesis require a deep understanding of the complex interactions of the process parameters. Based on the improved kinetic model developed in-house, Fraunhofer ISE was able to create a digital twin of the miniplant. This allows to accelerate learning processes while minimizing scale-up risks for future industrial plants: "After validating our models with data from the miniplant, we were able to simulate and optimize the plant parameters. Using the simulation results, we succeeded in increasing the performance of the miniplant step by step" reports Florian Nestler, research associate at Fraunhofer ISE.

Control Concept for Dynamics of the Integrated Steel Mill

The steel mill gases are an essential feedstock for the plant, yet are not constant in their quantity and composition. This boundary condition, which occurs frequently for processes based on fluctuating renewable energy sources, is a new challenge for methanol synthesis. Depending on the operating condition or available raw materials, the properties of the gases from the coke plant, the blast furnace (conversion of iron ore to pig iron) or the converter (conversion of pig iron to steel) can vary considerably. With the data collected, a control concept can now be designed to respond to changes in real-time and keep the synthesis at an optimum operating point at all times.

"We are pleased to have successfully completed the trials in Duisburg and to be able to devote ourselves to scaling up the process," says Max Hadrich. The validated process models will be used in a next step to design large-scale plants, carry out techno-economic assessments and evaluate the CO2 footprint of the process.