Chemists uncover cracks in the amour of cellulose nanocrystals 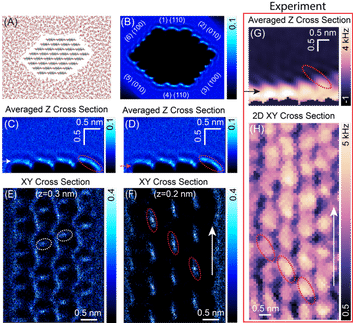 (A) A molecular dynamics snapshot of cellulose nanocrystal in water. The c-axis is perpendicular to the image plane. (B) 3D simulated water oxygen density map around a hexagonal-shaped CNC with crystalline planes labeled. (C and D) Averaged vertical 2D density map of water oxygen atoms above the (010) crystalline plane, taken through zx plane along the perpendicular direction to the chain axis. (E and F) 2D horizontal water density slices extracted from the 3D map at the vertical positions marked with white and red arrows in panel E and D, respectively. (G and H) Experimentally obtained vertical and horizontal 2D ∆f maps of the cellulose-water interface, respectively.

(A) AFM image of structural defects on CNC surface, acquired in water. (B) High-resolution AFM topography image of an individual CNC surface, revealing the details of the molecular organization at the interface. (C) The reconstructed image of the surface in panel B, obtained by executing inverse 2D-FFT spectra. (D and E) 2D vertical ∆f maps of the cellulose-water interface, indicating the structurally ordered water layers.

Chemists in Japan, Canada and Europe have uncovered flaws in the surface structure of cellulose nanocrystals—an important step toward deconstructing cellulose to produce renewable nano-materials relevant to biochemical products, energy solutions, and biofuels.

The findings—published in Science Advances—are the most detailed look yet at the surface chemistry and structure of individual cellulose nanocrystal (CNC) particles.

“This an essential step towards understanding the mechanisms of CNC degradation, which is crucial for biomass conversion, with relevance to renewable nanomaterials and chemical production,” said Professor Takeshi Fukuma, Director of the Nano Life Science Institute at Kanazawa University.

"This is a great example of an international collaboration developed at the Nano Life Science Institute at Kanazawa University," said University of British Columbia Professor Mark MacLachlan, Canada Research Chair in Supramolecular Materials and co-author on the paper. “It is important to visualize the surface and defects in these natural structures in order to advance their applications.”

Chemists with Professor MacLachlan’s lab at UBC helped devise the experiment, and synthesized and purified the cellulose nanocrystals for the project. Computational studies and modeling were undertaken by a team from Finland, led by Professor Adam Foster.

The study also modelled the three-dimensional arrangement of water molecules near the CNC surface—which might offer material scientists additional clues to how the CNC surface might respond to molecular adsorption, diffusion and chemical reactions.