Why DEET Keeps Mosquitos and Other Insects at Bay 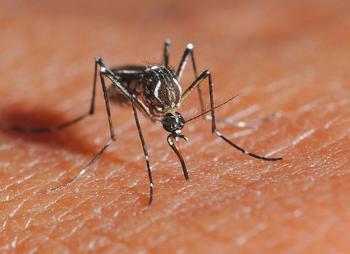 For decades DEET has been successfully used to repel biting insects. Scientists from Rockefeller University, New York, in collaboration with the Max Planck Institute for Chemical Ecology in Jena, Germany, have now clarified DEET’s (N,N-diethyl-meta-toluamide) mechanism of action. The substance does not block the insects’ recognition of attracting odor signals or cause an active avoidance behavior in mosquitoes and fruit flies, as has been assumed previously. In fact, the substance is such an effective repellent because it disrupts the insects’ odor code. So-called odorant receptors (OR) function to detect special odor signals that enable the insect to locate a potential host or food source. DEET corrupts messages from attractive scents, and as a consequence mosquitoes or fruit flies lose their orientation.

Used as a repellent since 1946

The research results achieved by neurobiologists from Leslie Vosshall’s group at Rockefeller University, USA, helped now settle a scientific dispute over DEET's mode of action that has been ongoing for decades. DEET was developed in 1946 as an effective repellent against insect bites and has been used worldwide since. It does, however, neither function as a stimulus blocker nor as an active repellent. The substance, which is only slightly perceptible to humans, is very likely an insect confusant. In collaboration with Bill Hansson and Marcus Stensmyr from the Max Planck Institute for Chemical Ecology in Jena, Germany, who analyzed the odor substances, the scientists elucidated DEET’s mechanism of action by means of modern molecular, neurobiological and chemical techniques.

One neuron, one receptor

The requirements of the experiments fortunately matched the anatomy of the odor reception apparatus. The antenna of the fruit fly Drosophila melanogaster carry sensilla which house olfactory sensory neurons (OSNs) expressing specific odorant receptors (OR). At least two such OSNs are housed in one sensillum. In the experiments, the electric signals of both OSNs were recorded simultaneously and compared to each other. If a selected odor substance, such as linalool, was used as a stimulus, the presence of DEET had a stimulating effect on OSNs expressing receptor Or59b, whereas simultaneously an inhibiting effect on OSNs expressing receptor Or85a could be observed. Altogether, the reactions of four OSNs to ten different odor substances were compared. All substances, except for three, elicited different reactions in the presence of DEET, actually depending on the concentration of the odors in the environment. If no odor substance was used for stimulation, DEET alone did hardly cause any reaction. This means that DEET corrupts the odor code of the insects, which react confused as a result.

To decode DEET’s mechanism of action the receptor Or59b was analyzed in more detail. 18 strains of fruit flies, which had been collected in different places of the world, were compared for their reaction to odor stimuli and showed similar results in comparison to the laboratory strain – with the exception of one Brazilian strain: This strain seemed insensitive to DEET and showed different activation patterns to specific odor stimuli. The Or59b encoding gene from the South American strain was compared to the gene from the laboratory strain and showed several deviations in the derived amino acid sequences. Analysis of individual amino acid exchanges using transgenic fruit flies showed that a valine-to-alanine substitution in the Brazilian strain was sufficient to annihilate the effect of DEET – evidence that DEET directly interacts with an odorant receptor and not with the conserved subunits that are also present in the receptor complexes, such as Orco (olfactory receptor coreceptor). The broad repertoire of different ORs in various insect species and their ecotypes may hold the key to the enormously broad range of activity of DEET.