Chemical reaction could streamline manufacture of pharmaceuticals and other compounds

The reaction resolves a long-standing challenge in organic chemistry 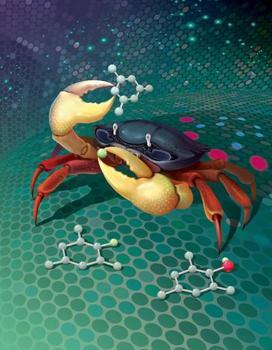 Image was created by Mingjun Quan, based on a design by Changxia Yuan.

The crab represents the chemical phthaloyl peroxide. The claws are the reactive regions of the molecule that undergo the reaction. The crab is grabbing a molecule (forming the carbon-oxygen bond) then tearing a hydrogen atom off.

Researchers at The University of Texas at Austin have discovered a new chemical reaction that has the potential to lower the cost and streamline the manufacture of compounds ranging from agricultural chemicals to pharmaceutical drugs.

The reaction resolves a long-standing challenge in organic chemistry in creating phenolic compounds from aromatic hydrocarbons quickly and cheaply.

Phenolic compounds, or phenols, are broadly used as disinfectants, fungicides and drugs to treat many ailments such as Parkinson's disease. Creating a phenol seems deceptively simple. All it requires is replacing a hydrogen molecule on an aromatic hydrocarbon with an oxygen molecule.

"This is a chemical transformation that is underdeveloped and at the same time pivotal in the production of many chemicals important to life as we know it," said Dionicio Siegel, an assistant professor of chemistry in the College of Natural Sciences at The University of Texas at Austin.

The secret that Siegel and his colleagues discovered is a substance called phthaloyl peroxide. This chemical was studied in the late 1950s and early 1960s, but it has been largely ignored during the intervening years.

The scientists were conducting basic studies on phthaloyl peroxide, building on previous research, and decided to use it to tackle the age-old problem of transforming aromatic hydrocarbons into phenols.

The advantage to using phthaloyl peroxide is that the reaction does not require the use of acids or catalysts to work, and it can add oxygen to a wide variety of starting materials.

"There are no special conditions," said Siegel. "You just combine the reagents, mix them and go. It's very simple and straight forward."

The paper describing this discovery was published in Nature.

The new process can be applied to other problems in organic chemistry. One particular area of interest is creating metabolites to drugs. Metabolites are the products left after the body finishes breaking down, or metabolizing, a substance. When testing drugs, scientists need to take into account not just how the drug itself reacts in the body, but also how the metabolites react.

"We've had a long-standing interest in accessing metabolites of drugs or compounds that are used in biological systems," said Siegel. "Just as it's important that the drug doesn't have deleterious side effects, it's equally important that the metabolite doesn't have an effect. You need to be able to test them, and there's not really a direct way to access metabolites other than using liver microsomes, and that's not efficient and it doesn't always work."

Another area where Siegel and his colleagues are applying what they have learned is in developing even more reactive agents that will expand the scope of chemicals that can be transformed. Siegel hopes to get this new process into the hands of others quickly. He is working with chemical supply companies to market the phthaloyl peroxide compound and/or the precursors and make it available to people in research and the pharmaceutical industry.

"It hasn't even come out yet," said Siegel, "but there are a lot of people that are already picking up the technique and working on it."