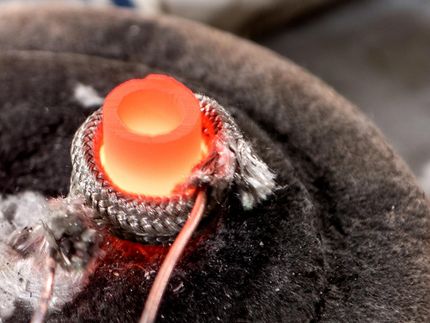 Researchers have developed a new low-cost technique for converting bulk powders directly to oxide nanowires. Shown is a crucible in which an alloy of lithium and aluminum is being formed. 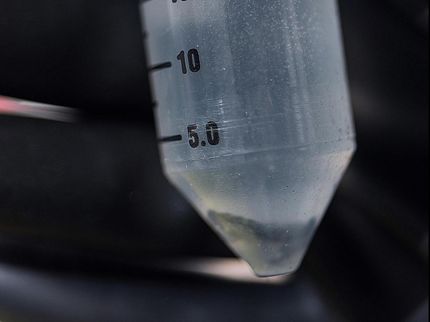 One step in forming oxide nanowires from bulk powders involves dissolving the powders in ethanol.

A simple technique for producing oxide nanowires directly from bulk materials could dramatically lower the cost of producing the one-dimensional (1D) nanostructures. That could open the door for a broad range of uses in lightweight structural composites, advanced sensors, electronic devices - and thermally-stable and strong battery membranes able to withstand temperatures of more than 1,000 degrees Celsius.

The technique uses a solvent reaction with a bimetallic alloy - in which one of the metals is reactive - to form bundles of nanowires (nanofibers) upon reactive metal dissolution. The process is conducted at ambient temperature and pressure without the use of catalysts, toxic chemicals or costly processes such as chemical vapor deposition. The produced nanowires can be used to improve the electrical, thermal and mechanical properties of functional materials and composites.

The research was supported by the National Science Foundation and California-based Sila Nanotechnologies. The process is believed to be the first to convert bulk powders to nanowires at ambient conditions.

"This technique could open the door for a range of synthesis opportunities to produce low-cost 1D nanomaterials in large quantities," said Gleb Yushin, a professor in the School of Materials Science and Engineering at the Georgia Institute of Technology. "You can essentially put the bulk materials into a bucket, fill it with a suitable solvent and collect nanowires after a few hours, which is way simpler than how many of these structures are produced today."

Yushin's research team, which included former graduate students Danni Lei and James Benson, has produced oxide nanowires from lithium-magnesium and lithium-aluminum alloys using a variety of solvents, including simple alcohols. Production of nanowires from other materials is part of ongoing research.

"Minimization of the interfacial energy at the boundary of the chemical reaction front allows us to form small nuclei and then retain their diameter as the reaction proceeds, thus forming nanowires," Yushin explained. "By controlling the volume changes, surface energy, reactivity and solubility of the reaction products, along with the temperature and pressure, we can tune conditions to produce nanowires of the dimensions we want."

One of the attractive applications may be separator membranes for lithium-ion batteries, whose high power density has made them attractive for powering everything from consumer electronics to aircraft and motor vehicles. However, the polymer separation membranes used in these batteries cannot withstand the high temperatures generated by certain failure scenarios. As result, commercial batteries may induce fires and explosions, if not designed very carefully and it's extremely hard to avoid defects and errors consistently in tens of millions of devices.

Using low-cost paper-like membranes made of ceramic nanowires could help address those concerns because the structures are strong and thermally stable, while also being flexible - unlike many bulk ceramics. The material is also polar, meaning it would more thoroughly wetted by various battery electrolyte solutions.

"Overall, this is a better technology for batteries, but until now, ceramic nanowires have been too expensive to consider seriously," Yushin said. "In the future, we can improve mechanical properties further and scale up synthesis, making the low-cost ceramic separator technology very attractive to battery designers."

Fabrication of the nanowires begins with formation of alloys composed of one reactive and one non-reactive metal, such as lithium and aluminum (or magnesium and lithium). The alloy is then placed in a suitable solvent, which could include a range of alcohols, such as ethanol. The reactive metal (lithium) dissolves from the surface into the solvent, initially producing nuclei (nanoparticles) comprising aluminum.

The dissolved lithium can be recovered and reused. The dissolution process generates hydrogen gas, which could be captured and used to help fuel the heating step.

Though the process was studied first to make magnesium and aluminum oxide nanowires, Yushin believes it has a broad potential for making other materials. Future work will explore synthesis of new materials and their applications, and develop improved fundamental understanding of the process and predictive models to streamline experimental work.

The researchers have so far produced laboratory amounts of the nanowires, but Yushin believes that the process could be scaled up to produce industrial quantities. Though the ultimate cost will depend on many variables, he expects to see fabrication costs cut by several orders of magnitude over existing techniques.

"With this technique, you could potentially produce nanowires for a cost not much more than that of the raw materials," he said. Beyond battery membranes, the nanowires could be useful in energy harvesting, catalyst supports, sensors, flexible electronic devices, lightweight structural composites, building materials, electrical and thermal insulation and cutting tools.

The new technique was discovered accidentally while Yushin's students were attempting to create a new porous membrane material. Instead of the membrane they had hoped to fabricate, the process generated powders composed of elongated particles.

"Though the experiment didn't produce what we were looking for, I wanted to see if we could learn something from it anyway," said Yushin. Efforts to understand what had happened ultimately led to the new synthesis technique.

In addition to those already named, the research included Alexandre Magaskinski of Georgia Tech and Gene Berdichevsky of Sila Nanotechnologies.