Three magnetic states for each hole 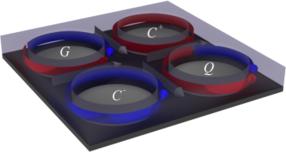 Researchers at the HZDR have calculated that the specific layout of four holes ("antidots") in a layer of cobalt will accommodate 15 different combinations for programming.

Nanometer-scale magnetic perforated grids could create new possibilities for computing. Together with international colleagues, scientists from the Helmholtz Zentrum Dresden-Rossendorf (HZDR) have shown how a cobalt grid can be reliably programmed at room temperature. In addition they discovered that for every hole ("antidot") three magnetic states can be configured.

Physicist Dr. Rantej Bali from the HZDR, together with scientists from Singapore and the University of Western Australia, designed a special grid structure in a thin layer of cobalt in order to program its magnetic properties. His colleagues from the National University in Singapore produced the grid using a photolithographic process similar to that currently used in chip manufacture. Approximately 250 nanometers sized holes, so-called antidots, were created at regular intervals – with interspaces of only 150 nanometers – in the cobalt layer. In order to be able to stably program it, the Singapore experts followed the Dresden design, which specified a metal layer thickness of approximately 50 nanometers.

At these dimensions the cobalt antidot grid displayed interesting properties: Dr. Bali’s team discovered that with the aid of an externally applied magnetic field three distinct magnetic states around each hole could be configured. The scientists called these states "G", "C" and "Q". Dr. Bali: "Antidots are now in the international research spotlight. By optimizing the antidot geometry we were able to show that the spins, or the magnetic moments of the electrons, could be reliably programmed around the holes."

Since the individually programmable holes are situated in a magnetic metal layer, the grid geometry has potential use in computers that would work with spin-waves instead of electric current. "Spin-waves are similar to the so-called Mexican waves you see in a football stadium. The wave propagates through the stadium, but the individual fans, in our case the electrons, stay seated", explains Dr. Bali. Logic chips utilizing such spin-waves would use far less power than today’s processors, because no electrical current is involved.