When a porous solid retains its properties in liquid form 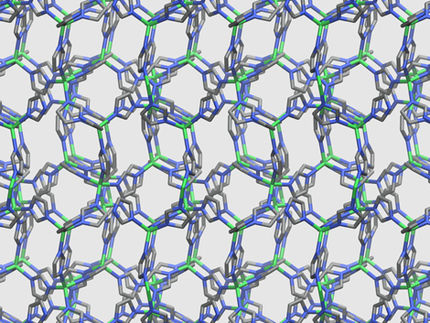 Crystalline structure of the ZIF-4 material at room temperature 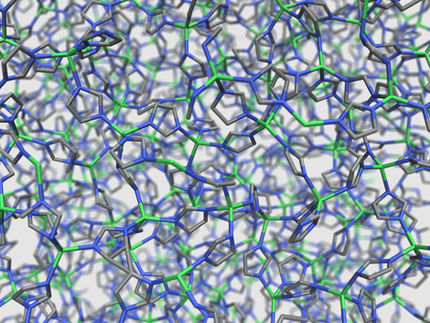 Known for their exceptional porosity that enables the trapping or transport of molecules, metal-organic frameworks (MOFs) take the form of a powder, which makes them difficult to format. For the first time, an international team led by scientists from the Institut de recherche de Chimie Paris, and notably involving Air Liquide, has evidenced the surprising ability of a type of MOF to retain its porous properties in the liquid and then glass state.

Metal-organic frameworks (MOFs) constitute a particularly promising class of materials. Their exceptional porosity makes it possible to store and separate large quantities of gas, or to act as a catalyst for chemical reactions. However, their crystalline structure implies that they are produced in powder form, which is difficult to store and use for industrial applications. For the first time, a team of scientists from the CNRS, Chimie ParisTech, Cambridge University, Air Liquide and the ISIS (UK) and Argonne (US) synchrotrons has shown that the properties of a zeolitic MOF were unexpectedly conserved in the liquid phase (which does not generally favor porosity). Then, after cooling and solidification, the glass obtained adopted a disordered, non-crystalline structure that also retained the same properties in terms of porosity. These results will enable the shaping and use of these materials much more efficiently than in powder form.

To achieve this, the scientists used neutron diffraction and X-rays to observe the structure of the MOF after melting, once it was in the liquid phase. They correlated this data with molecular simulations that reproduced the same temperature conditions as those applied to the MOF during melting. Combination of the two methods enabled them to describe the structural changes affecting the material as it entered the liquid phase and then re-solidified. They thus succeeded in demonstrating an atypical mechanism. The MOF under study was made up of pyramidal molecular frameworks, each consisting of a zinc atom surrounded by four cyclical, organic molecules called imidazolates. At melting, the energy generated by the rise in temperature was able to break down the link between an imidazolate and zinc, thus destroying the pyramidal framework. The resulting space was then occupied by another imidazolate cycle released by a neighboring framework to recreate the original structure. It is these molecular exchanges between complex structures that gave the MOF its liquid character.

In the case of this particular MOF, porosity resulted from the presence of gaps between the pyramidal structures that could be filled by gases. Because the MOF retained the same pyramidal structure in the liquid state, its porosity was thus maintained. As well as the ability of this MOF to retain its properties after melting, this study describes the case of a porous liquid, very few of which feature in the literature.

Paris Institute of Science and Technology