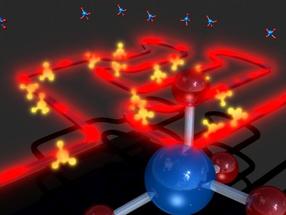 This artistic rendering depicts the new silicon photonic absorption spectrometer, which is smaller than a dime and can be manufactured using high-volume computer chip fabrication techniques. The portion of infrared light protruding outside the waveguide is absorbed by methane molecules, enabling spectroscopic measurement of the methane concentration.

The process of extracting natural gas from the earth or transporting it through pipelines can release methane into the atmosphere. Methane, the primary component of natural gas, is a greenhouse gas with a warming potential approximately 25 times larger than carbon dioxide, making it very efficient at trapping atmospheric heat energy. A new chip-based methane spectrometer, that is smaller than a dime, could one day make it easier to monitor for efficiency and leaks over large areas.

Scientists from IBM Thomas J. Watson Research Center in Yorktown Heights, NY, developed the new methane spectrometer, which is smaller than today's standard spectrometers and more economical to manufacture. The researchers detail the new spectrometer and show that it can detect methane in concentrations as low as 100 parts-per-million.

The spectrometer is based on silicon photonics technology, which means it is an optical device made of silicon, the material used to make computer chips. Because the same high-volume manufacturing methods used for computer chips can be applied to make the chip-based methane spectrometer, the spectrometer along with a housing and a battery or solar power source might cost as little as a few hundred dollars if produced in large quantities.

"Compared with a cost of tens of thousands of dollars for today's commercially available methane-detecting optical sensors, volume-manufacturing would translate to a significant value proposition for the chip spectrometer," said William Green, leader of the IBM Research team. "Moreover, with no moving parts and no fundamental requirement for precise temperature control, this type of sensor could operate for years with almost no maintenance."

Such low-cost, robust spectrometers could lead to exciting new applications. For example, the IBM team is working with partners in the oil and gas industry on a project that would use the spectrometers to detect methane leaks, saving companies the time and money involved in trying to find and fix leaks using in-person inspection of thousands of sites.

"During natural gas extraction and distribution, methane can leak into the air when equipment on the well malfunctions, valves get stuck, or there's a crack in the pipeline," said Green. "We're developing a way to use this spectrometer-on-a-chip to create a network of sensors that could be distributed over a well pad, for example. Data from these sensors would be processed with IBM's physical analytics software to automatically pinpoint the location of a leak as well as quantify the leak magnitude."

Methane is a trace gas, the classification given to gases that make up less than 1 percent of the volume of Earth's atmosphere. Although the researchers demonstrated methane detection, the same approach could be used for sensing the presence of other individual trace gases. It could also be used to detect multiple gases simultaneously.

"Our long-term vision is to incorporate these types of sensors into the home and things people use every day such as their cell phones or vehicles. They could be useful for detecting pollution, dangerous carbon monoxide levels or other molecules of interest," said Eric Zhang, a member of the research team. "Because this spectrometer offers a platform for multispecies detection, it could also one day be used for health monitoring through breath analysis."

The new device uses an approach known as absorption spectroscopy, which requires laser light at the wavelength uniquely absorbed by the molecule being measured. In a traditional absorption spectroscopy setup, the laser travels through the air, or free-space, until it reaches a detector. Measuring the light that reaches the detector reveals how much light was absorbed by the molecules of interest in the air and can be used to calculate the concentration of them present.

The new system uses a similar approach, but instead of a free-space setup, the laser travels through a narrow silicon waveguide that follows a 10-centimeter-long serpentine pattern on top of a chip measuring 16 square millimeters. Some of the light is trapped inside the waveguide while about 25 percent of the light extends outside of the silicon into the ambient air, where it can interact with trace gas molecules passing nearby the sensor waveguide. The researchers used near infrared laser light (1650 nanometer wavelength) for methane detection.

To increase the sensitivity of the device, the investigators carefully measured and controlled factors that contribute to noise and false absorption signals, fine-tuned the spectrometer's design and determined the waveguide geometrical parameters that would produce favorable results.

To compare the new spectrometer's performance with that of a standard free-space spectrometer, they placed the devices into an environmental chamber and released controlled concentrations of methane. The researchers found that the chip-based spectrometer provided accuracy on-par with the free-space sensor despite having 75 percent less light interacting with the air compared to the free-space design. Furthermore, the fundamental sensitivity of the chip sensor was quantified by measuring the smallest discernable change in methane concentration, showing performance comparable to free-space spectrometers developed in other laboratories.

"Although silicon photonics systems -- especially those that use refractive index changes for sensing -- have been explored previously, the innovative part of our work was to use this type of system to detect very weak absorption signals from small concentrations of methane, and our comprehensive analysis of the noise and minimum detection limits of our sensor chip," said Zhang.

The current version of the spectrometer requires light to enter and exit the chip via optical fibers. However, the researchers are working to incorporate the light source and detectors onto the chip, which would create an essentially electrical device with no fiber connections required. Unlike current free-space sensors, the chip then does not require special sample or optical preparation. Next year, they plan to start field testing the spectrometers by placing them into a larger network that includes other off-the-shelf sensors.

"Our work shows that all of the knowledge behind silicon photonics manufacturing, packaging, and component design can be brought into the optical sensor space, to build high-volume manufactured and, in principle, low cost sensors, ultimately enabling an entirely new set of applications for this technology," said Green.