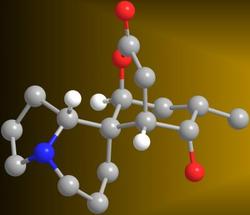 The club moss Lycopodium serratum is a creeping, flowerless plant used in homeopathic medicine to treat a wide variety of ailments. It contains a potent brew of alkaloids that have attracted considerable scientific and medical interest. However, the plant makes many of these compounds in extremely low amounts, hindering efforts to test their therapeutic value.

That is no longer a problem for what is arguably the most complex of these alkaloids, a compound called Serratezomine A: an alkaloid that could have anti-cancer properties and may combat memory loss. A team of synthetic chemists at Vanderbilt University report in the March 18 issue of the Journal of the American Chemical Society that they have created an efficient way to make this molecule from scratch.

It took six years to develop the process because the researchers had to invent some entirely new chemical methods to complete the synthesis. These methods should make it easier to synthesize other Lycopodium alkaloids as well as other natural compounds with therapeutic potential.

In addition to their therapeutic possibilities, the Vanderbilt chemists were attracted to these compounds because they are among the most intricately structured and functionally dense of all the small molecules produced by living organisms. The compounds consist of carbon and nitrogen atoms assembled in unique ring structures.

"This was a challenging problem," says Professor of Chemistry Jeffrey Johnston, who led the research effort. 'It takes years to develop a new chemical reaction and then apply it to the natural product target. So, once we start, we don't stop."

In the world of total synthesis chemistry, it is not enough to figure out a way to synthesize a naturally occurring molecule. The process has to produce large enough quantities of the molecule that it can be tested for biological activity. That means that the number of sequential steps in the process - what chemists refer to as the longest linear sequence - should be as small as possible to maximize production. For example, if a sequence has 30 steps and each step has an 80 percent yield, the overall yield of the sequence is about one-tenth of a percent. At the same time, one low-yield step will knock a process out of contention.

The longest linear sequence in the Serratezomine A synthesis is 15 steps and it has an overall yield of 1.7 percent, Johnston says. That is an average yield of 77 percent per step. The chemists kept the sequence this short by using a strategy called convergence. They prepared one of the key fragments in the synthesis in parallel to the main sequence.

Johnston has handed over the Serratezomine A that his group has produced to Vanderbilt's drug discovery program, which identifies novel agents suitable for preclinical testing, in order to evaluate its therapeutic value.

Members of Johnston's research team are doctoral student Aroop Chandra; Julie A. Pigza, who is now a post-doctoral associate at the University of California, San Diego; Jeong-Seok Han, who now works at CJ Pharmaceuticals in South Korea; and Daniel Mutnick, who is now an associate scientist at Novartis in San Diego. The research was supported by grants from the National Institute of General Medical Sciences and Eli Lilly and Company and by a Pfizer Diversity Fellowship.