The Making of Biorelevant Nanomaterials 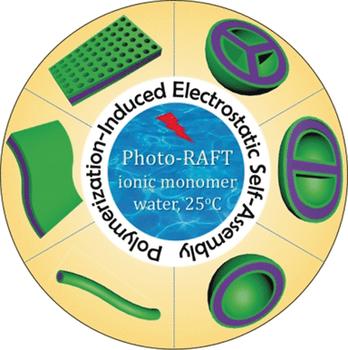 The interactions of biological macromolecules such as nucleic acids, proteins, and polysaccharide–protein conjugates can be mimicked by artificial polyelectrolytes. Such synthetic polyionic complexes are expected to serve as novel platforms to stabilize and deliver drugs, proteins, or nucleic acids. In the journal Angewandte Chemie, Chinese investigators have introduced a versatile, commercially applicable preparation strategy of such nanomaterials with tunable morphology. The preparation of libraries of these low-dimensional biorelevant nanostructures can be envisaged.

DNA, RNA, proteins, and many polysaccharide–protein conjugates are charged biological macromolecules. They have complex structures with unique functions, making cellular life possible. Not surprisingly, synthetic polyionic assemblies that mimic the properties of the biological macromolecules are expected to serve as ideal platforms for interaction with biology. With their controllable shape and charge state, such polyion complexes or PICs could serve as active carriers for nucleic acids in gene therapy and for the targeted delivery of drugs. However, the rational design of the PICs is still challenging because structure, final morphology, and charge state depend on thousands of thermodynamic and kinetic parameters. Often, shape, reactivity and stability are not reproducible. At Soochow University, Suzhou, China, investigator Yuanli Cai and his colleagues are therefore advancing rationalized preparation schemes. With the method called "polymerization-induced electrostatic self-assembly" or PIESA, they have now proposed a scalable and cost-effective preparation protocol for low-dimensional PICs with tunable morphologies for biomedical use.

The protocol is based on the polymerization-induced self-assembly method (PISA) to rationally synthesize block copolymer nanoparticles in aqueous medium. The authors expanded the protocol by introducing a positively charged monomer, which was then polymerized in the presence of a presynthesized polyion of opposite charge and another macromolecule serving as an uncharged copolymer block. The final nanomaterial consisted of defined complexes of the charged polymers and copolymers. It showed remarkable properties.

Dependent on the concentration of solids, the authors observed structural transitions of the synthesized PICs from vesicles to compartmented vesicles to large-area ultrathin flexible films. And dependent on the solvent used, either pore-dense films or extremely long nanowires became dominant, the latter leading to gelation. The authors pointed out that their PIESA protocol under polymerization with visible-light yields “high structure reproducibility on a commercially viable scale under eco-friendly aqueous conditions at 25 °C.” In other words, complex nanomaterials with tunable morphology and charge state could be conveniently prepared. Biomedical applications for carrying and delivery of DNA other biological charged polymers at their site of action and are envisaged, as well as a library of low-dimensional nanomaterials with tunable morphology.