A new method for synthesizing a promising magnetic material 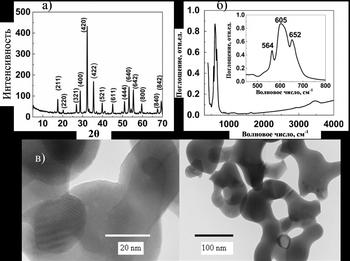 This is a microphotography of Dy3Fe5O12

Although the method of anion resin exchange precipitation has been known since 1960s-1970s, it was only used to synthesize the hydroxides of aluminum, chrome (III), iron (III), indium (III), and several other compounds. No valuable breakthroughs have been made in this area in the past 40 years, and there are almost no modern publications on it. A team of Siberian scientists was the first to use anion exchange resin to obtain complex oxide systems. This work is only one of a series of publications prepared by a group of scientists from SFU and the Institute of Chemistry of Siberian Department of Russian Academy of Sciences.

"Our laboratory has been working on the method of anion resin exchange precipitation applicable to different systems for two decades now, and using it we've obtained materials with magnetic properties," told Svetlana Saikova, professor of the department of inorganic chemistry of SFU, and doctor of chemistry.

Anion resin exchange precipitation is a method of the so-called "wet" chemistry. The process takes place at room temperature and under atmospheric pressure. The product is being synthesized from a mixture of water solutions of salts, but instead of traditional precipitation agents (alkali or ammonia) an anion exchange resin is used. It is a polymer - an insoluble matrix in the form of small (0.25-0.5 mm radius) microbeads trapping of anions from initial salts. Traditional precipitation of metals often leads to the formation of non-crystalline loose deposits (i.e. finely dispersed particles without any structure) that are difficult to separate from the subsided electrolyte. The use of anion exchange resin prevents the pollution of the product with cations. Moreover, due to the fact that the anions of the initial salt are trapped by polymer beads, scientists were possible to obtain pure metals hydroxides. Moreover, the anion resin exchange precipitation has good results as ions of the solution form insoluble compounds or transfer to the sorbent phase.

Another advantage of this method is that it allows to obtain the product in controlled conditions without high temperatures or aggressive substances. All reaction products are generated at the same time which makes their further interaction easier.

Due to the ability to optimize the correlation between reacting substances, to choose the ion-exchange resin, and, if required, to add substances regulating the precipitation rate to the system scientists can carry out the synthesis with fixed pH values. It is important, if the final product should have certain properties, such as metastable or active phases which is impossible during regular alkali subsidence because of the local oversaturation effect.

This method is much more convenient, cheaper, and better controlled that the widely spread solid phase garnet synthesis method that is used today to obtain the majority of garnet-structured compounds. In this method finely milled mixtures with particular composition are baked in the air or vacuum at different temperatures. Depending on the initial mixture, the process may take different time. Then, taking into account the required properties of the final product, temperature within the range of 1300-1350°C is selected. Moreover, for the composition to be homogeneous, milling and baking are done several times.

The deposit obtained in the course of anion-exchange subsidence is also processed with heat. However, it requires 700-900°? and less baking time. All products are subsided at the same time, the components start to interact on the stage of reaction, and further thermal processing only increases the interaction speed. Due to high activity of nanosized precursors (substances that participate in the reaction), materials obtained using this method may have unusual properties.

In particular, this method allowed the scientists to synthesize a substance with the formula Dy3Fe5O12 - iron-dysprosium garnet. Physical methods showed that the deposits consisted of 2-30 nm nanoparticles with crystal structure. Magnetic properties of the garnet were studied using magnetic circular dichroism.

The interest in these substances is determined by the wide range of garnet's physical properties. For example, almandine, natural iron and aluminum garnet (Fe3Al2Si3O12) is often used in jewelry due to its bright crimson color and hardness. Many garnets have magnetic properties as well. In particular, aluminum-yttrium (Y3Al5O12) and iron-yttrium garnets (Y3Fe5O12) are widely spread and quite well-studied. They are widely used as components of microwave devices, circulators, phase switchers, magnetic photon devices, and insulators. Nanocrystals of these materials play a huge role in physics and technology of magnetic materials. The authors studied magnetic properties of iron-dysprosium garnet and found out that they changed if yttrium is replaced with dysprosium. The group plans an extensive study of garnets with yttrium replaced with other rare earth elements.