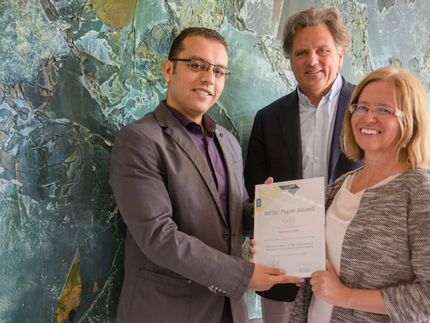 Every year WITec, the Raman imaging company, recognizes three peer-reviewed publications that stand out in terms of originality and significance and feature data acquired with a WITec microscope. This year, scientists from universities and institutes in Bochum, Bayreuth and Minneapolis received the awards. Some 80 publications were submitted, all documenting the versatility of confocal Raman imaging for the investigation of materials.

The Gold Paper Award goes to Hesham K. Yosef. With his colleagues from the Department of Biophysics, headed by Klaus Gerwert, and coworkers from other institutes at Ruhr-University Bochum (Germany) he developed a new, non-invasive approach based on Raman imaging for the detection of urothelial carcinoma cells in urine. Urothelial carcinomas constitute the majority of bladder tumors. Noninvasive, painless methods are urgently wanted for the diagnosis of this cancer and the monitoring of the treatment outcome. The scientists first identified differences in the Raman spectra of healthy and high-grade cancerous cells in urine. The most prominent differences in Raman bands indicated a decrease in the level of glycogen and an increase in the levels of fatty acids in the tumor cells, illustrating distinct metabolic changes. The scientists then developed and trained a classifier that could differentiate healthy from cancerous urothelial cells by their Raman spectra. A Raman band at 482 relative wavenumbers, indicating a massive loss of glycogen in tumor cells, emerged as a highly reliable marker. A first validation test on the urine of ten diagnosed and ten healthy patients was performed and the classifier diagnosed all samples automatically with 100% accuracy. First author of the publication, Hesham K. Yosef, says that he is convinced that, “The results will pave the way for spectral, noninvasive cytology of urine using Raman microspectroscopy.”

Mimicking biological structures with interesting functional features is a thriving field of research. Marvin Gernhardt, Holger Schmalz, Seema Agarwal and coworkers at the Chair of Macromolecular Chemistry II, University of Bayreuth, and the Bavarian Polymer Institute (Germany) were inspired by biological fibers and developed new fibers with distinct structures. They produced the fibers by side-by-side electrospinning of a thermo-responsive polymer and methacrylate-based copolymer. By changing the spinning solvents they fabricated side-by-side and coaxial bead-on-string fibers and analyzed these in detail with correlative Raman imaging, atomic force microscopy and scanning electron microscopy. The scientists concluded: “The work opens the way for the construction of heterostructured fiber morphologies based on different polymer combinations, offering high potential for applications as actuators, smart textiles, water management and catalysis.”

Guanglin Yu receives the Bronze Paper Award. He and his colleagues from the Departments of Mechanical Engineering and Biomedical Engineering at the University of Minnesota in Minneapolis (USA) analyzed, when and how ice crystals develop in cells during freezing. Cryopreservation is a common method used to store cells, however not all cells survive the procedure. It has been hypothesized that a high cooling rate leads to the death of cells because of intercellular ice formation. How that happens is still a matter of debate. The researchers used confocal Raman imaging to monitor the freezing response of lymphoblasts under various conditions during the cryopreservation process. Ice crystals, cell mass and protective substances could be easily imaged and identified by their Raman spectra. As a parameter of cell death, they used a Raman signal indicating the release of cytochrome c from mitochondria. The imaging study showed that only the formation of large intracellular ice crystals (> 2 μm) is deadly for the cells and that a mixture of glycerol and trehalose prevented cell death most efficiently at a cooling rate of 10°C per minute. “Raman spectromicroscopy provides a powerful tool for observing IIF [intracellular ice formation] and understanding its role in cell death during freezing, and enables the development, to our knowledge, of new and improved cell preservation protocols,” concluded the authors in their paper.