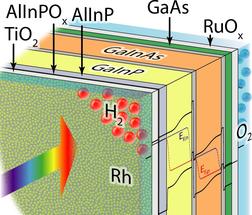 The transparent anti-corrosion layer contains Rhodium nanoparticles as a catalyst.

Hydrogen will play a central role as a storage medium in sustainable energy systems. An international team of researchers has now succeeded in raising the efficiency of producing hydrogen from direct solar water-splitting to a record 19 per cent. They did so by combining a tandem solar cell of III-V semiconductors with a catalyst of rhodium nanoparticles and a crystalline titanium dioxide coating. Teams from the California Institute of Technology, the University of Cambridge, Technische Universität Ilmenau, and the Fraunhofer Institute for Solar Energy Systems ISE participated in the development work. One part of the experiments took place at the Institute for Solar Fuels in the Helmholtz-Zentrum Berlin.

Photovoltaics are a mainstay of renewable-energy supply systems, and sunlight is abundantly available worldwide – but not around the clock. One solution for dealing with this fluctuating power generation is to store sunlight in the form of chemical energy, specifically by using sunlight to produce hydrogen. This is because hydrogen can be stored easily and safely, and used in many ways – whether in a fuel cell to directly generate electricity and heat, or as feedstock for manufacturing combustible fuels. If you combine solar cells with catalysts and additional functional layers to form a “monolithic photoelectrode“ as a single block, then splitting water becomes especially simple: the photocathode is immersed in an aqueous medium and when light falls on it, hydrogen is formed on the front side and oxygen on the back.

For the monolithic photocathode investigated here, the research teams combined additional functional layers with a highly efficient tandem cell made of III-V semiconductors developed at Fraunhofer ISE. This enabled them to reduce the surface reflectivity of the cell, thereby avoiding considerable losses caused by parasitic light absorption and reflection. “This is also where the innovation lies“, explains Prof. Hans-Joachim Lewerenz, Caltech, USA: “Because we had already achieved an efficiency of over 14 per cent for an earlier cell in 2015, which was a world record at the time. Here we have replaced the anti-corrosion top layer with a crystalline titanium dioxide layer that not only has excellent anti-reflection properties, but to which the catalyst particles also adhere.“ And Prof. Harry Atwater, Caltech, adds: “In addition, we have also used a new electrochemical process to produce the rhodium nanoparticles that serve to catalyse the water-splitting reaction. These particles are only ten nanometres in diameter and are therefore optically nearly transparent, making them ideally suited for the job.“

Efficiency of 19,3 per cent

Under simulated solar radiation, the scientists achieved an efficiency of 19.3 per cent in dilute aqueous perchloric acid, while still reaching 18.5 per cent in an electrolyte with neutral pH. These figures approach the 23 per cent theoretical maximum efficiency that can be achieved with the inherent electronic properties for this combination of layers.

“The crystalline titanium-dioxide layer not only protects the actual solar cell from corrosion, but also improves charge transport thanks to its advantageous electronic properties“, says Dr. Matthias May, who carried out part of the efficiency determination experiments at the HZB Institute for Solar Fuels in the forerunner laboratory to the Solar-Fuel Testing Facility of the Helmholtz Energy Materials Foundry (HEMF). The record figure now published is based on work that May had already begun as a doctoral student at the HZB and for which he was awarded the Helmholtz Association Doctoral Prize for the field of energy research in 2016. “We were able to increase the operating life to almost 100 hours. This is a major advance compared to previous systems that had already corroded after 40 hours. Nevertheless, there is still a lot to be done“, May explains.

That is because it is still fundamental research on small, high-priced systems in the laboratory. However, the researchers are optimistic: “This work shows that tailor-made tandem cells for direct solar water-splitting have the potential to achieve efficiencies beyond 20 per cent. One approach for this is to choose even better band-gap energies for the two absorber materials in the tandem cell. And one of the two could even be silicon“, explains Prof. Thomas Hannappel, TU Ilmenau. Teams at Fraunhofer ISE and TU Ilmenau are working to design cells that combine III-V semiconductors with lower-priced silicon, which could considerably reduce costs.