Breaking the bond: To take part or not? 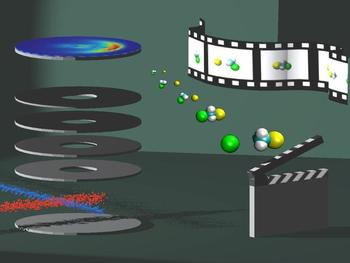 The Royal Society of Chemistry

In a specially constructed experiment, the physicists from Innsbruck collide the charged particles with molecules in vacuum and examine the reaction products.

Physicists working with Roland Wester at the University of Innsbruck have investigated if and how chemical reactions can be influenced by targeted vibrational excitation of the reactants. They were able to demonstrate that excitation with a laser beam does not affect the efficiency of a chemical exchange reaction and that the excited molecular group acts only as a spectator in the reaction.

A frequently used reaction in organic chemistry is the nucleophilic substitution. It plays, for example, an important role in the synthesis of new chemical compounds or for biomolecules in solution and is therefore of great industrial importance. In this reaction, charged particles encounter molecules and one molecular group is replaced by another. For a long time, science has been trying to reproduce these processes at the interface of chemistry and physics in the laboratory and to understand them at the atomic level. The team headed by experimental physicist Roland Wester at the Institute of Ion Physics and Applied Physics at the University of Innsbruck is one of the world's leading research groups in this field.

In a specially constructed experiment, the physicists from Innsbruck collide the charged particles with molecules in vacuum and examine the reaction products. To determine if targeted vibration excitation has an impact on a chemical reaction, the scientists use a laser beam that excites a vibration in the molecule. In the current experiment, negatively charged fluorine ions (F-) and methyl iodide molecules (CH3I) were used. In the collision, due to the exchange of an iodine bond with a fluorine bond, a methyl fluoride molecule and a negatively charged iodine ion are formed. Before the particles meet, the laser excites carbon-hydrogen stretching vibrations in the molecule. "Our measurements show that the laser excitation does not enhance the exchange reaction," says participating scientist Jennifer Meyer. "The hydrogen atoms just seem to be watching the reaction." The result is substantiated by the observation that a competing reaction strongly increases. In this other proton exchange reaction, a hydrogen atom is torn from the methyl iodide molecule and hydrogen fluoride (HF) is formed. "We let the two species collide 20 times per second, the laser is applied in every second collision, and we repeat the process millions of times," explains Meyer. “Whenever the laser is irradiated, this proton exchange reaction is drastically amplified." Theoretical chemists from the University of Szeged in Hungary and the University of New Mexico in the USA have further supported the experimental results from Innsbruck using computer simulations.

In high-precision investigations of chemical processes, only the simplest model, the reaction of an atom with a diatomic molecule, has so far been studied. "Here, all particles are inevitably involved in the reaction. There are no observers", says Roland Wester. The system that we are now studying is so large that observers appear. However, it is still small enough to be able to study these observers very precisely." For large molecules, there are many particles that are not directly involved in the reaction. The investigation of their role is one of the long-term goals of the Wester group. The researchers also want to refine the current experiment in order to uncover further possible subtle effects.

The question of whether certain reactions can be intensified by the targeted excitation of individual molecular groups is also an important consideration. "If you understand something, you can also exercise control," sums up Roland Wester. "Instead of stimulating a reaction through heat, it may make sense to stimulate only individual groups of molecules to achieve a specific reaction," adds Jennifer Meyer. This may avoid competing reaction processes that are a common problem in industrial chemistry or biomedical research. The more precise the control over the chemical reaction, the less waste is produced and the lower the costs.