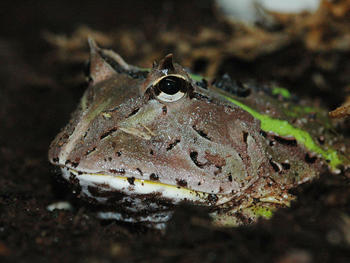 The horned frog lurks for its prey, halfway entrenched. 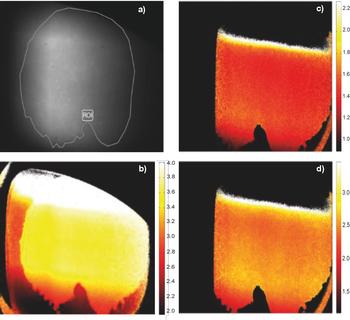 Frogs' capture their prey with the sticky mucus covering their tongues, but this mucus isn't inherently adhesive. Frog mucus is thought to be pressure-sensitive, with tongue retraction strain triggering adhesion. A research team from Oregan State University, Aarhus University and Kiel University has now observed mucus stuck to prey to form fibrils, leading to the hypothesis that glycosylated mucin proteins are reordered by tongue retraction. Understanding the chemical mechanism of this process can inform design of biomimetic materials, and so the scientists have used new techniques to examine the surface chemistry of frog tongues.

"We are able to take a chemical image of the frog tongue print and then look at the outer four to five nanometers of the surface. Our techniques are really surface sensitive, and that's where we think most of the action takes place," said co-author Joe E. Baio, whose group was involved in developing the near-edge x-ray absorption fine structure (NEXAFS) microscopy techniques used in this study. NEXAFS and sum frequency generation of vibrational spectra enabled analysis of the interfacial chemistry of'mucus prints'. These prints were gathered by the Group of Professor Stanislav Gorb from Kiel University, who also inspired the study. They tempted horned frogs into launching their tongues at crickets cunningly placed behind glass microscope slides.

„Afterwards we analysed these prints chemically. This way we can explain the physical-chemical processes on frog tongues for the first time and futher contribute to the understanding of the pressure sensitivity of the mucus", says Gorb.

The group found that the secondary structures of frog tongue mucins are randomly arranged, but upon tongue retraction, molecules align into well-ordered fibrils. With hydrophobic groups orientated towards the slide surface and hydrophilic groups towards the mucus bulk. "The physical input changes the chemistry of the mucus and that's how it turns the glue on," said Baio.

Next, the team consisting of zoologists, chemists and physicists wants to find the specific mucin sequence in order to replicate the inherent reversibility inartificial pressure-sensitive adhesives.