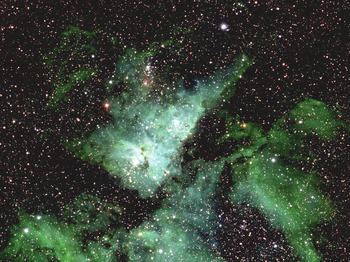 The team at the Cluster of Excellence Resolv has investigated chemistry in interstellar space.

Solvated acids tend to release a proton. However, they display more complex behaviour under space conditions.

Bochum-based researchers from the Cluster of Excellence Ruhr Explores Solvation (Resolv), together with cooperation partners from Nijmegen, have investigated how acids interact with water molecules at extremely low temperatures. Using spectroscopic analyses and computer simulations, they investigated the question of whether hydrochloric acid (HCl) does or does not release its proton in conditions like those found in interstellar space. The answer was neither yes nor no, but instead depended on the order in which the team brought the water and hydrochloric acid molecules together.

Understanding how complex molecules were formed

If hydrochloric acid comes into contact with water molecules under normal conditions, such as at room temperature, the acid immediately dissociates: it releases its proton (H+), one chloride ion (Cl-) remains. The research team wanted to find out whether the same process also takes place at extremely low temperatures below ten Kelvin, i.e. below minus 263.15 degrees Celsius. “We would like to know whether the same acid-alkali chemistry as we know on Earth also exists in the extreme conditions in interstellar space,” explains Martina Havenith, Speaker for the Cluster of Excellence Resolv. “The results are crucial for understanding how more complex chemical molecules formed in space – long before the first precursors of life came into existence.”

In order to replicate the extremely low temperatures in the laboratory, the researchers had the chemical reactions take place in a droplet of superfluid helium. They monitored the processes using a special type of infrared spectroscopy, which can detect molecular vibrations with low frequencies. A laser with especially high brightness, as is available in Nijmegen, was needed for this. Computer simulations enabled the scientists to interpret the experimental results.

It comes down to the order

“Under the conditions that can be found in interstellar space, the acids are thus able to dissociate, but this does not necessarily have to happen – both processes are two sides of the same coin, so to speak,” summarises Martina Havenith.

Chemistry in space is not simple

The researchers assume that the result can also be applied to other acids, i.e. it represents the basic principle of chemistry under ultracold conditions. “Chemistry in space is by no means simple; it might even be more complex than chemistry under planetary conditions,” says Dominik Marx. After all, it depends not only on the mixing ratios of the reacting substances but also on the order in which they are added to each other. “This phenomenon needs to be taken into consideration in future experiments and simulations under ultracold conditions,” says the researcher.